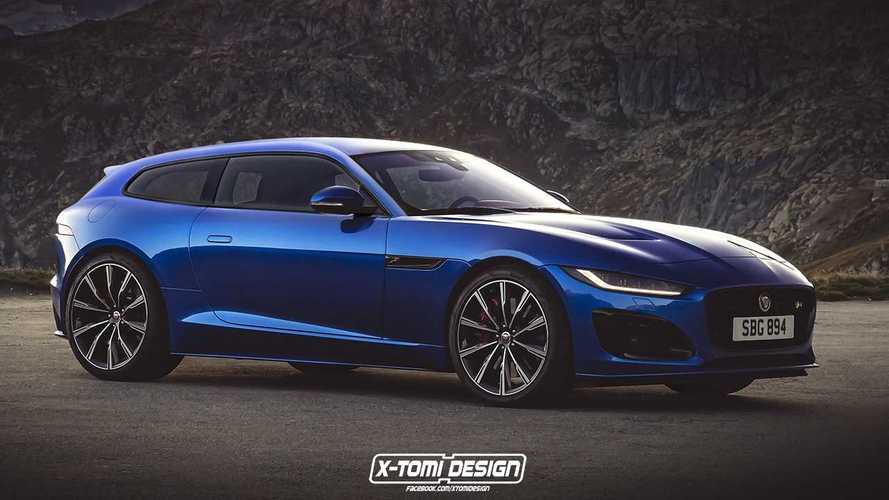 Jaguar could sell this as the practical F-Type.

Earlier this month, Jaguar updated the F-Type, its stylish two-door sports car, for the 2021 model year. It wasn’t a complete redesign. Instead, the automaker refreshed the car’s exterior bodywork, improved interior ergonomics, and rejiggered the top-tier car’s powertrains. X-Tomi Design decided to take the car’s new look and extend the coupe’s roof, turning the new F-Type into a gorgeous shooting brake.

Check out the latest F-Type news:

The F-Type’s new styling makes the car look longer and lower than before, and the longer roof helps accentuate those proportions. One change Jaguar made to the car’s styling is reorienting the headlights horizontally. Before, Jaguar positioned them vertically along the front, reaching over the front wheels. The horizontal headlights widen the front-end design. We can’t see the Jaguar’s rear-end design, though changes are far subtler at the rear compared to the car’s previous design.

The F-Type shooting brake, if Jaguar were ever to make such a creation, which it won’t, would gain a lot of functionality with the taller roof – the cargo space could be cavernous. The longer roof also doesn’t hinder the F-Type’s smoothed design, especially over the rear wheel arches.

With the redesign, Jaguar tweaked the powertrain lineup. While the turbocharged 2.0-litre and supercharged V6 carry over unchanged, the supercharged 5.0-litre V8 saw improvements. With the SVR model tossed in the dustbin of history, the range-topping F-Type R now makes 575 bhp (429 kilowatts) and 516 pound-feet (700 Newton-metres) of torque. It’s capable of rocketing the Jaguar to 60 miles per hour (96 kilometres per hour) in 3.5 seconds. A shooting brake would be a few tenths slower with the added weight.