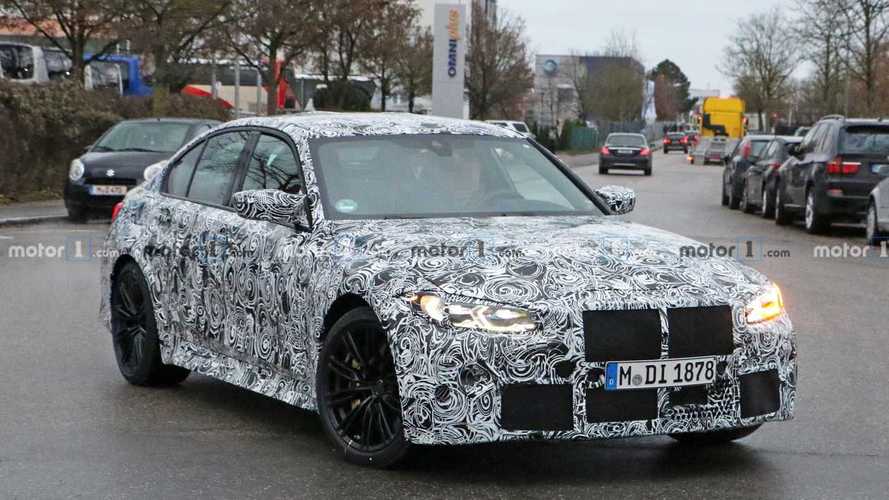 The grille, however, is still well concealed.

It looks like the next-generation BMW M3 is avoiding snow for the time being. Winter testing is in full swing for automakers, but this round of M3 spy shots come from a slightly warmer – if not damp and dreary – climate. The iconic sports saloon has been in the testing phase for quite some time, and it will be sometime longer before all the covers are finally lifted.

The big question is whether or not there’s a big grille lurking beneath the covers in the front end. The answer is probably yes, but we say that because there still isn’t smoking-gun proof of its existence. We’ve seen the grille behind screen-camouflaged 4 Series test vehicles, and BMW’s M4 GT3 teaser showed a tall grille dipping low into the darkness. We’ve also seen leaked photos of the massive double kidney on a car in a factory, but there’s no way to confirm it’s actually the M3. In other words, there’s still hope that the four-door will wear a slightly more conventional face.

These photos do little to sway the argument in either direction. Even zoomed in and artificially brightened in Photoshop, we can’t see through the black mesh to identify body lines and grille dimensions for the test vehicle. However, we can see the M3 will wear different headlights compared to the 3 Series. We’re also privy to the M-spec side mirrors and side sills, not to mention the cool lip spoiler at the back. This round of shots also glimpses the M3’s interior, which isn’t a big mystery since it’s part of the 3 Series family. We do see the M3’s upgraded seats though, as well as visual proof that a manual transmission is still in the mix.

BMW already stated the new M3 won’t arrive until the 2021 model year. The 4 Series is slated to debut sometime in the second half of next year, and at this time we believe the new M3 will launch after the 4 Series breaks cover. That could be late 2020, or in the first half of 2021.