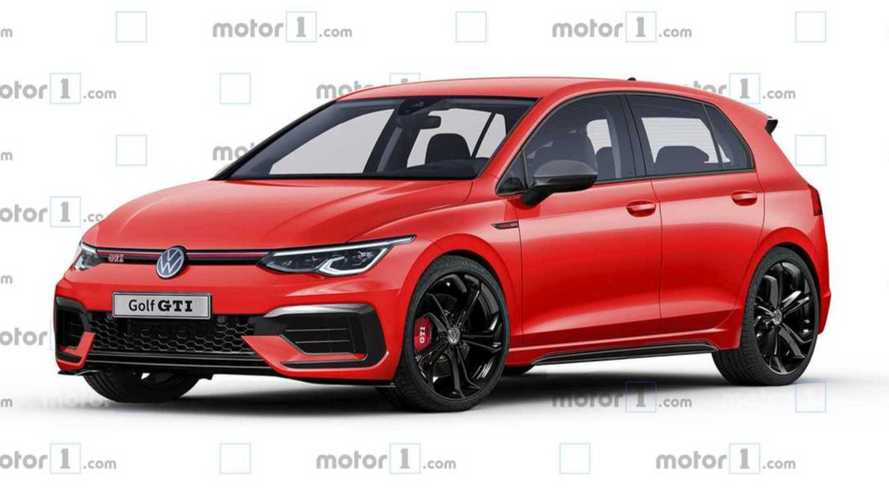 We uncover the quintessential hot hatch.

In late November this year, our photographers spied the next-generation Volkswagen Golf GTI basically undisguised, following a number of previous spy sessions with camouflaged prototypes. While the spotted trial car gives us a good look at what to expect from the hot hatch, it still hides the little details that make all the difference with the regular Golf 8. We decided to take the spy shots as a base and render the new Golf GTI in full detail to uncover all the secrets.

Our artists envision the car with a more aggressive front bumper where two C-shaped diffusers channel air towards the massive lower grille. Above that, a thin red strip connects the LED headlights and the GTI logo is put asymmetrically on the passenger side of the front fascia.

The most obvious exterior upgrade is the set of 19-inch all-black wheels hiding Brembo brake calipers and wrapped in 235/35 performance Continental tyres. Black side mirror caps, wider side skirts, and GTI badges on the front wings round off the visual enhancements.

It has been confirmed the new GTI won’t go the hybrid way, at least for now, and will continue to rely on a 2.0-litre turbocharged engine. According to preliminary information, the EA888 unit that’s also offered in the current Mk VII Golf GTI will have two outputs – 255 bhp (190 kilowatts) and 295 bhp (219 kW) with the more potent variant reserved for the GTI TCR which will replace the GTI Performance. No changes in the gearbox range are planned as well - the two available options will be a standard six-speed manual or a seven-speed, dual-clutch automatic.

It won’t take long until we see the actual new Golf GTI as Volkswagen has already confirmed the performance hatch will debut at some point next year. It will be joined by the range-topping Golf R and the diesel-powered Golf GTD.