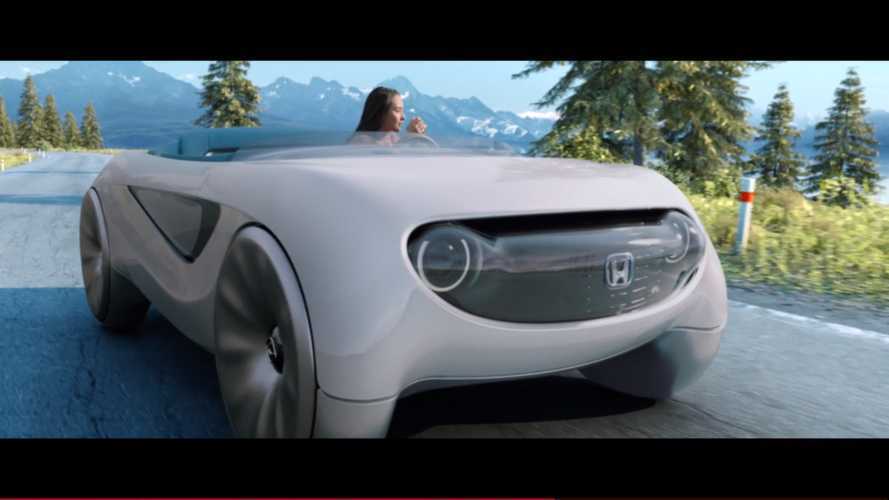 The Augmented Driving Concept will cater to "human curiosity."

Once upon a time, the Consumer Electronics Show in Las Vegas focused on, well, consumer electronics. Actually, it still does, but the continual evolution of electronic systems into vehicles means automakers have an increasing interest in attending. Case-in-point is this curious concept car from Honda, known simply as the Augmented Driving Concept.

It’s out-of-this-world design and empty interior identify this car as a proper concept, meaning you won’t ever see it in production. As for the name, that conjures images of fancy screens and big displays presenting the driver with augmented views of the vehicle’s surroundings, but the Augmented Driving Concept offers nothing of the sort. According to Honda, this vehicle seeks to be an autonomous vehicle for people who “still want to experience the emotion and thrill of driving.” If you find that statement rather paradoxical, you’re not the only one.

Honda further explains its strange concept by saying it “features a seamless transition from autonomous to semi-autonomous driving” though a special steering wheel that essentially is an all-in-one control unit. The concept’s design is that of a fully autonomous vehicle lacking traditional controls, save for a strange steering wheel that offers drivers passengers the ability to instantly take control. That's not exactly cutting-edge technology, but this wheel also adopts the role of accelerator and brake. Pulling back on the wheel tells the car to slow down. Pushing the wheel makes it accelerate. Because you know, that sounds much easier than using an accelerator or brake pedal along with a steering wheel.

To further showcase this car’s amazing ability, Honda includes a diagram that shows how augmented driving can take you to amazing places a simple automated car apparently can’t go. Picking up sweets, for example, is something you can do in the Augmented Driving Concept. You can also get coffee or go to the park, whereas the computer-minded overlord in a fully autonomous car will simply take you to point B. Hopefully, point B isn’t a donut shop, or you could be in serious trouble.

Admittedly, we’re getting a bit snarky here on Honda. The company further explains that its concept has several different submodes for semi-autonomous operation, and we do get it. Instead of a fully autonomous car with no controls and a set, pre-programmed destination, the Augmented Reality Concept allows passengers to easily interrupt those commands without necessarily going to full manual control. As such, you can get in your autonomous car and hit the road with adventure in your heart and absolutely no destination in mind. It’s interesting, but couldn’t the same thing be accomplished just by building an autonomous car with normal controls?

In any case, you can see this quirky concept and even take a virtual test drive at the 2020 CES Show, coming in January to the Las Vegas Convention Center.