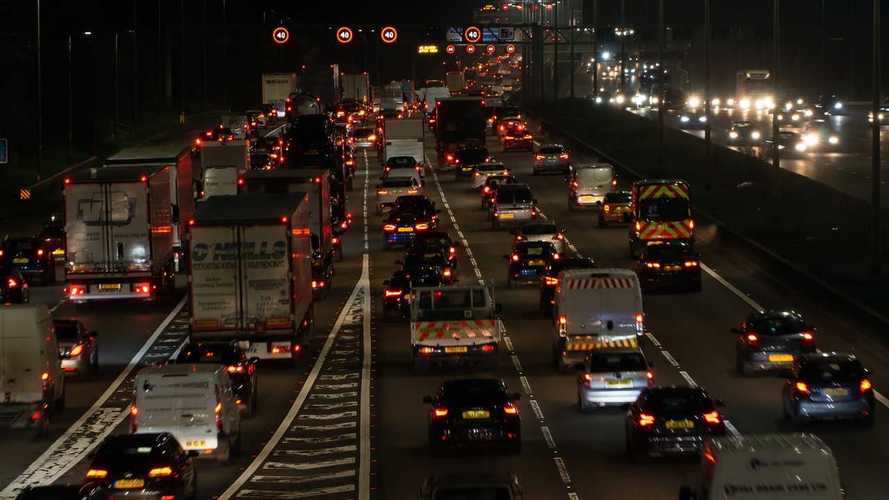 Almost 31 million drivers plan leisure trips in the run-up to the 25th.

Britain’s motorways are expected to clog with traffic in the run-up to Christmas, with almost 31 million motorists planning to hit the road.

According to a study by the RAC and data firm Inrix, more than 25 million leisure journeys by car are expected between today (December 17) and Sunday (December 22), with a further 5.6 million on December 23 and Christmas Eve. The two organisations are predicting the largest number of hold-ups on Wednesday, December 18 and Thursday, December 19 as commuter and holiday traffic mix.

More on driving in traffic:

Inrix data suggests the M1 in Bedfordshire and Northamptonshire, the northern and western sections of the clockwise M25 and the M6 in the West Midlands will see most of the traffic. Two of the longest delays are expected on Sunday, December 22, with drivers facing an hour-and-a-half delay on the northbound M1 between Flitwick and Daventry, and nearly an hour on the M25 clockwise, between the junctions for the M23 and M40.

“Our figures suggest many more drivers are planning leisure trips by car in the run-up to this Christmas this year, so bumper-to-bumper traffic on some motorways and major A-roads is going to be near-guaranteed,” said the RAC’s patrol of the year, Ben Aldous. “While Christmas Day is still a little way off, it looks as though millions of drivers are planning to complete their getaway trips this week. Unfortunately, when you add in the prospect of unsettled weather, with heavy rain and strong winds in some parts, these are likely to be pretty unpleasant drives for many of us.

And Inrix transportation analyst Trevor Reed added: “It does look as though this week is going to see a marked rise in traffic volumes on major roads in the UK, with Thursday expected to see the largest increase in vehicles compared to a normal December day. Drivers desperate to get away for Christmas are going to find themselves competing with commuters and shoppers for road space, so we recommend keeping tuned in to the changing traffic conditions on local radio and via in-car apps.”

Highways England, the organisation in charge of the country’s motorways and major A-roads, says it is completing or lifting more than 800 miles of roadworks in a bid to keep the roads as free-flowing as possible.

“We’re doing everything we can to make journeys as smooth as possible and that’s why we’re keeping around 98% of the road network we manage, free from roadworks,” said Highways England’s customer service director, Melanie Clarke. “Safety is our top priority and we know from experience that almost half of breakdowns can easily be avoided if motorists carry out simple vehicle checks before setting off over this period.

“We’re asking people to be prepared too. Make sure you have everything you need for your journey should there be any delays, check before and during your journey and also make sure you’re aware of the signs and signals on motorways.”