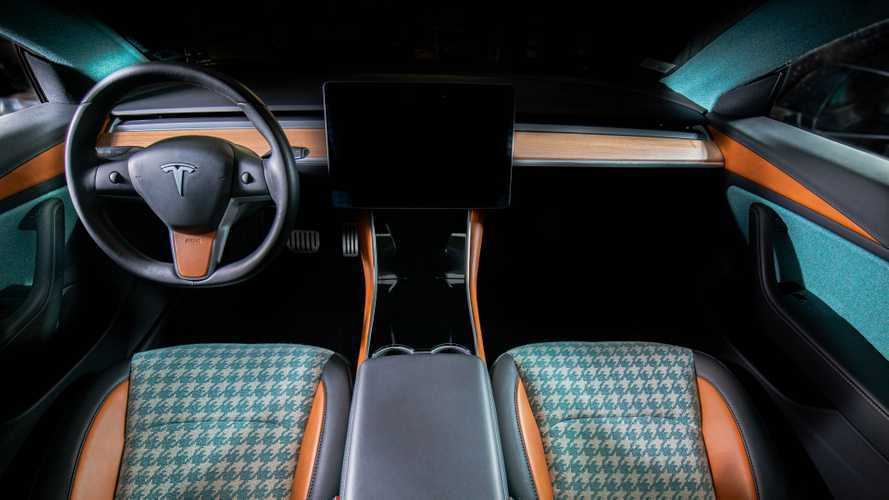 We've never seen wool and wood used like this.

The Tesla Model 3 is popular EV, though some criticise its styling as rather boring. On the flip side, Vilner is known for being anything but boring, and the Model 3 is the subject of the company’s latest effort to make all things with wheels as dynamic as possible. That is, if you consider an orange/blue interior with patterned seats and wood panelling on the dash dynamic.

This wood-filled Mercedes 250CE is shrouded in mystery

As the photos show, Vilner goes after the Model 3’s interior with a series of fabrics and eco-leather, the latter of which adds a healthy splash of orange to the otherwise dark grey interior. The seat inserts and headrests are adorned with a white/turquoise fabric houndstooth pattern that Vilner calls “a petite-like decorative relief.” The turquoise is repeated sans the pattern on the centre console, door inserts, and headliner, and with the Model 3’s large glass roof breaking up the headliner, the effect looks almost like a roll cage created by Smurfs. Weird seat inserts notwithstanding, it’s not such a bad design.

More orange trim is found on the seat belts and sun visors, not to mention the steering wheel and centre console. The dash gets something a bit different however – wood. Not a wood applique mind you, but a legit wood panel running the entire width of the dash. It’s at least a lighter shade of wood that’s actually a reasonable match to the orange trim in the car, but it still manages to stand out in an interior that already, well, stands out. We’ll let you, dear reader, decide if that’s a good or bad thing.

Vilner describes its Tesla Model 3 interior as “a unique atmosphere of tranquillity, serenity, and captivating hospitality that surrounds you like a homemade garment.”  We’ll concede that it’s most definitely unique.

The monotonous world of TESLA explodes in VILNER colours

The gray digital gloom in the interior of a noiseless car can be brought to life by a stylish and positively predisposing combination of high quality materials inscribed in the original design of the passenger compartment – a unique atmosphere of tranquility, serenity and captivating hospitality that surrounds you like a home-made garment.

It is a knit of fabrics and tissues with magnetic colors and exquisite aroma that fill with meaning and vitality the symbiosis of form and function – a personification of exquisite perfectionism, which corresponds with the higher academic class of the fine arts.

Studio Vilner's hand-crafted masterpiece buys with refined luxury that absorbs the senses. Part of the dark base of factory eco leather in Tesla's interior has been retained, so that the changes made later can be even more pronounced.

At the center of the composition is a turquoise wool damask with a petite-like decorative relief. It covers the main parts of the seats and backrests. The same color, but with smoother nuance (in which almost imperceptible brown filaments penetrate), is duplicated once more on the side columns and the center console, completely covering the sector around the transparent sunroof.

The overly refined, monotonous atmosphere in the body of the original, dominated by all the shades of black, contrasts with the light accents of leather elements with a warm copper tinge integrated into the seats, head restraints and the two upper edges of the center console.

With the Tesla Model 3, the standard dashboard has been replaced by a standalone touchscreen and a decorative wood panel has been mounted. In the processing made by Vilner Garage, the presence of this simple element is further emphasized, since part of the skin used for the door trim is of a similar color and thus creates the feeling that the panel is gradually overflowing to them.

The sun visors and seat belts are also replaced with colored ones, as is the small steering wheel detail labeled “Airbag”.

All of this gives a typical car of the digital age an unadulterated sophistication, characteristically for long gone times filled with serenity and idealism.