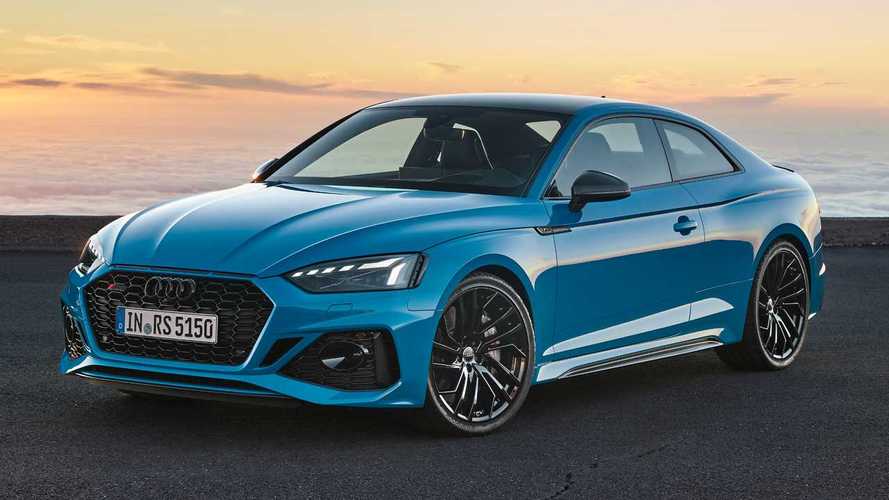 The mid-cycle refresh comes along with a revised infotainment system, same bhp.

Audi Sport is ending a busy year with two updated RS models by taking the wraps off the facelifted RS5 Coupe and RS5 Sportback. As expected, the two high-performance cars carry over the styling updates applied to the A5 and S5 models as well as to the mechanically related A4, S4 and RS4 Avant models. The most noticeable changes have occurred at the front where the Singleframe grille is wider than before and is flanked by fresh headlights optionally available with matrix LED and laser light technology.

As it is the case with the models mentioned above, the styling changes are quite substantial as Audi has also installed new air vents above the grille to lend the front fascia a 1984 Quattro vibe. The modified side sills and diffuser insert at the back are also debuting with the mid-cycle refresh to complete the look. Customers will be able to order the RS5 duo in fresh new colours dubbed “Turbo Blue” and “Tango Red,” along with a variety of carbon styling packages. Speaking of carbon, the coupe comes with a CFRP roof lowering the vehicle’s weight by four kilograms (8.8 pounds).

Both models ride as standard on 19-inch alloy wheels, but Audi also has three versions of 20-inch rims. One of these sets comes finished in matte bronze while another is dressed in glossy black for a more elegant look. Hiding inside the wheels are the standard steel discs hugged by black or red calipers, but carbon fibre ceramic brakes can be installed at the front axle with blue, red or gray calipers.

Stepping inside the cabin, the first thing you’ll notice will be the updated infotainment system now rocking a 10.1-inch touchscreen display. Love it or loathe it, the screen is still of the tablet variety as opposed to the MMI setup of the larger A6, A7, A8 models where it’s neatly integrated into the centre console. At an additional cost, the 12.3-inch Audi Virtual Cockpit Plus will allow the driver to switch between multiple screens of the fully digital instrument cluster, including one exclusive to RS models.

Ingolstadt, December 10, 2019 – Hot on the heels of the updated Audi RS 4 Avant, its sister cars have also now moved with the times aesthetically and technologically. The RS 5 and RS 5 Sportback now combine the latest Audi exterior design hallmarks with the upgraded cabin configuration already adopted by the RS 4, bringing MMI touch technology based around a large central screen. The twin-turbo V6 with its 450PS output and 600 Nm of torque continues to provide spine-tingling performance that is reflected in sub-four-second 0-62mph sprint capability.

“The revision of the RS 5 Coupé and RS 5 Sportback marks the successful conclusion of our 25th anniversary and the renewal of our model range,” says Oliver Hoffmann, Managing Director of Audi Sport GmbH. “Thanks to the standard permanent quattro drive, they occupy a special position in their segment.”

Streamlined: the exterior design
The enhancements to the exterior of the two RS 5 models are evident at first glance. At the front, the Singleframe is now wider and flatter in line with its big brothers, the RS 6 and RS 7, and new implied air vents above the grille provide a visual link with the classic Audi Sport quattro from 1984.

Flanking the grille are large, strongly contoured air inlets in a new pentagonal design. Matrix LED headlights are standard across the board, and in the Vorsprung version which heads the range in the UK these feature laser light and are identifiable by way of their darkened bezels.

Between the 40-millimetre wider wheel arches the side sills have been redesigned, as has the diffuser insert at the rear, which encloses the two large tailpipes of the exhaust system. Depending on version, the gloss black, matt aluminium and carbon styling packages give an even more individual look, and in the Carbon Black and Vorsprung models include a black finish for the four rings and RS logos. In addition, the Coupé can also be fitted with with a carbon roof with a CFRP structure for even more visual drama and a weight saving of around four kilograms. Both variants can also now be finished in the colours Turbo blue and Tango red, which are new to the RS 5 palette.

Low profile, high tech: the interior
Horizontal lines and dark colours characterise the interior of the revised RS 5 models. RS sport seats finished in fine Nappa leather are fitted as standard to all UK versions, as is the virtual cockpit plus with 12.3-inch display. It enables the driver to toggle between multiple screens, one of which is RS-specific and displays the rotational speed scale as a kind of angle that includes a shift light display. When the driver uses the RS mode steering wheel button to select one of the two new individual RS modes, the RS-specific performance design opens up and displays the maximum g-acceleration values, for example. The head-up display which is a standard feature of Vorsprung versions also offers exclusive RS graphics.

The virtual cockpit plus works with a new operating concept based around a 10.1-inch MMI touch display with acoustic feedback which is inclined towards the driver and incorporates the top tier MMI navigation plus module. In addition to its primary infotainment functions the large, free-standing display provides the driver with information on engine temperature, longitudinal and lateral acceleration, the quattro sport differential operating status, tyre pressures and tyre temperatures.

Traction, dynamism and stability: the drive
Immense tractive power and a high output combined with efficiency: The 2.9 TFSI twin-turbo V6, the heart of the RS 5 models, continues to deliver 450PS and a formidable 600 Nm (442.5 lb-ft) of torque from a speed of 1,900 rpm. Both RS 5 models accelerate from zero to 62mph in 3.9 seconds and can reach an electronically limited top speed of 155mph – in Vorsprung versions this is increased to 174mph.

A quick-shifting eight-speed tiptronic controllable via new, larger aluminium shift paddles directs the power of the engine to the quattro permanent all-wheel drive. The quattro drivetrain provides the two RS models with remarkable traction and stability, regardless of the weather, and a standard sport differential on the rear axle maximises its potential by distributing torque actively between the rear wheels.

High precision: the suspension
RS 5 and RS 5 Carbon Black models are fitted as standard with a taut RS sport suspension. The RS sport suspension plus with Dynamic Ride Control (DRC) hydraulic roll and pitch stabilisation is standard for the Vorsprung versions and optionally available for all others. It uses steel springs and three-stage adjustable dampers that are connected to one another via diagonal oil lines and a central valve. When cornering at speed, the valves regulate the oil flow in the damper of the spring-deflected front wheel at the outside of the bend. They reinforce the support and reduce pitching and rolling, thereby improving the vehicle’s handling characteristics.

In addition to the familiar comfort, auto, and dynamic modes, the Audi drive select dynamic handling system (standard) also offers the two new modes, RS1 and RS2. Once the driver has set the two modes to suit their personal preferences and stored them, they can be enabled directly via the “RS MODE” button on the steering wheel without having to operate the MMI touch response again. The system accesses important technical elements like the engine, transmission, damping, steering, dynamic steering, sport differential, and engine sound.

In standard form the revised RS 5 models are equipped with 19-inch wheels, with new 20-inch wheels reserved for the Carbon Black and Vorsprung versions. Appropriately, the Carbon Black wheel is painted completely in gloss black. As an upgrade to the powerful standard brake system, which is available with the option of red calipers, carbon fibre ceramic brake discs can be specified for the front axle.

More than 30 driver assist systems are offered for both RS 5 variants. Several are fitted as standard, and even more are included if the Vorsprung specification is chosen. The optional driver assistance tour pack gathers a number of the most popular systems together in one cost effective package.