London, U.K. – 8th December 2019 – Following a year of stunning over takes, nail-biting racing and a host of new talent emerging, superstars from throughout motorsport descended on London’s Grosvenor House for the 2019 Autosport Awards – dubbed ‘The Greatest Night in Motorsport’.

The 2019 Autosport Awards were this year also honored with royalty with His Serene Highness Prince Albert of Monaco attending to collect the Gregor Grant award to mark 90 years of the iconic Monaco Grand Prix.

In a year when Lewis Hamilton claimed International Racing Driver of the Year, presented by Pirelli,

and Marc Marquez claimed Rider of the Year, presented by Tata Communications, alongside their Formula 1 and MotoGP World Championships, a host of young talent solidified their places as future title contenders winning awards throughout the evening.

Red Bull Racing’s Alex Albon collected the Richard Mille Rookie of the Year award and McLaren’s Lando Norris was announced as British Competition Driver of the Year. The strong display of young driving talent was enhanced with Johnathan Hoggard taking home the evening’s marque award as winner of the Aston Martin Autosport BRDC Young Driver of the Year Award. Hoggard will receive £200,000, an F1 test drive with Aston Martin Red Bull Racing, a World Endurance Championship GTE car test as well as full membership of the British Racing Drivers’ Club. Johnathan joins an elite group of winners including the first winner of the prestigious award and new President of the BRDC, David Coulthard, who presented the award, Jenson Button, Dario Franchitti and many more drivers who currently compete in World Championship series. 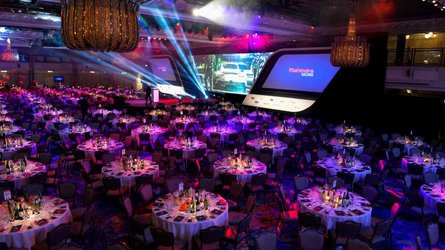 Charlie Whiting was posthumously awarded the John Bolster award. The Award, named after Autosport's co-founder and long-time technical editor, is presented annually to an organization or person that has made an exceptional contribution to motorsport technology. The late Whiting had been the FIA race director since 1997 and was responsible for all activity on track over a race weekend including safety, starting the race and enforcing rules and regulations. He had been a driving force in promoting safety in F1, including the introduction of the halo cockpit protection device last year.

James Allen, Motorsport Network President, said: “Celebrating current, future and past talents from throughout all corners of the Motorsport community is always a highlight of my year. Being guardians of the Autosport Awards is something we at Motorsport Network take great pride in. Congratulations to all our winners tonight and in particular Johnathan Hoggard our 2019 Aston Martin Autosport BRDC winner. It’s great to see so many young winners who with so much potential to become World Champions of the future.”

Winners of the awards voted for by the readers of Autosport were:

Rider of the Year, presented by Tata Communications

International Racing Driver of the Year, presented by Pirelli

British Competition Driver of the Year

Rally Car of the Year

Richard Mille Rookie of the Year

Rally Driver of the Year

National Driver of the Year

Racing Car of the Year, presented by Pirelli

The Autosport Williams Engineer of the Future Award

The Mahindra Pioneering and Innovation Award

Moment of the Year, presented by Marelli

Motorsport Network’s next event opens the 2020 motorsport season with Europe’s largest consumer and trade racing show at the NEC. The Autosport International Show starts on the 09th January 2020, with more information available here.