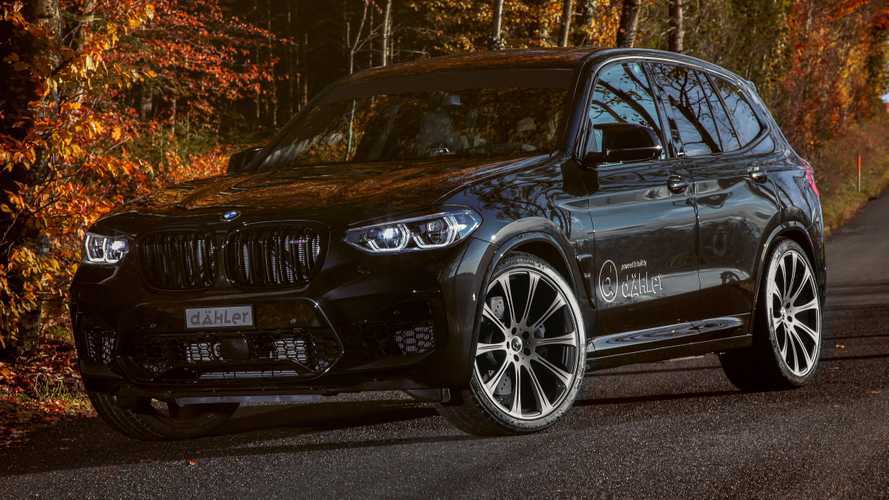 With BMW expecting the X3 M to become its best-selling M-branded car globally, it’s not a surprise that tuning firms are already working on the performance SUV. After seeing the Manhart X3 M, it’s now time to take a look at a new project by Swiss company Dahler. The comprehensive package includes performance and visual upgrades not only for the X3 M but also for the mechanically identical X4 M.

Described as being “strong as a grizzly bear, down-to-earth yet elegant,” the duo relies on a modified 3.0-litre turbocharged straight-six engine. In its standard form, the unit delivers 480 bhp and 443 lb-ft of twist in non-Competition guises. The more powerful variant comes with 510 bhp and the same amount of torque at peak.

Dahler’s WLTP-tested and EU-homologated performance pack boosts these numbers to respectful 610 bhp and 575 lb-ft. For those of you who live in Germany and use the unrestricted sections of the Autobahn on a daily basis, the removed top speed limiter should probably be a warmly welcomed addition, too. Dahler promises even more power with the Stage 2 tune of its package that’s currently in the works.

You won’t go unnoticed as both the X3 M and X4 M now benefit from a performance stainless steel exhaust system for a “sporty-sonorous” note. Dahler says the system has been optimized to work “perfectly” with the factory-installed petrol particulate filters. The SUVs also ride on a lowered suspension with precision calibrations to “diminish the sensitivity to crosswind and for an improved appearance.” A choice of 21- and 22-inch wheels is available.

Everything from the above said is already on sale and Dahler is meanwhile developing an adjustable in both height and hardness suspension kit, as well as visual enhancements such as a new front bumper lip spoiler.

The letter "M" still exerts a huge fascination even in times of downsizing. Especially when the «M» is combined with a performance upgrade «powered by dÄHLer» and appears on the road as a comprehensively optimized complete vehicle X3 M or X4 M «DÄHLer competition line». Exactly then it provides something magical.

In the category of compact SUVs, the X3 and X4 have positioned themselves optimally in the competitive environment and now, compete in the most powerful version as X3/X4 M and X3/X4 M competition – alongside a powerful and solid presence.

Dähler Competition Line AG from Belp near Bern in Switzerland exploit its optimization potential and finalized both vehicles by extensive customization and serious performance enhancements to the X3 M and X4 M "DÄHLer competition line" - strong as a grizzly bear, down-to-earth yet elegant en route in the Indian Summer with its marvelous play of colors ...

Performance data of the X3 M (F97) and X4 M (F98), respectively in the regular version or as a competition, optimized in the respective versions as «dÄHLer competition line»:
Dähler added an additional performance modification to the factory-installed engine - original series: 353 kW (480 hp), 600 Nm (lb-ft 443) and 375 kW (510 hp), 600 Nm (lb-ft 443) - and gathered every reasonable option from the engine, and the entire vehicle, in order to provide utmost pleasure.

Exhaust system:
The dynamic, beefy appearance is accompanied by the sporty-sonorous and unmistakably DÄHLER-typical sound of the stainless steel exhaust system with 4 tailpipes, also produced in-house «built by DÄHLer».
As we enhanced the system's perfection, now the gasoline engines harmonize perfectly with the new factory-installed gasoline particle filters (OPF)!

Chassis:
Carefully tuned sport suspension kit «built by dÄHLer» with lowering for a more stable handling, for significantly reduced sway movements, to diminish the sensitivity to crosswind and for an improved appearance.

Coming soon:
• Top-tuned, harmonious and shock-absorbent suspension solution by the use of the multiple - adjustable in both height and hardness - complete suspension «built by dÄHLer» with a crisp, sporty-taut (but never hard!) identification. Because of a corresponding lowering, we also achieve a brawny and very dynamic look.
• Front spoiler lip «built by DÄHLer».

Call, make an appointment, optimize, drive off and EXPERIENCE the individualized X3 M or X4 M yourself. True to the motto: dynamic power, precise performance and driving pleasure in every situation - on asphalt or gravel/ sand as well as in rain and snow/mud! The X3 M and X4 M "DÄHLER competition line", harmonized and optimized as a desirable package, one can literally feel the technological harmony and precision and enjoy the sporty, active feeling.