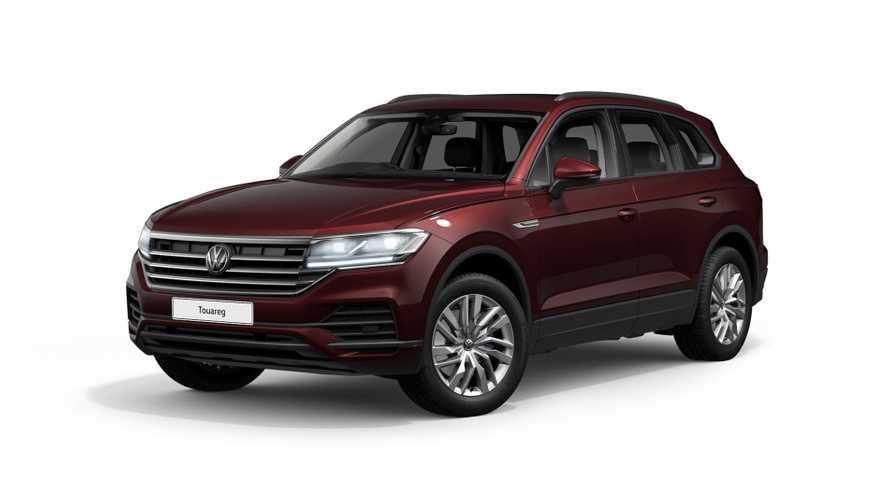 There's a new base-spec car with a £45,445 asking price, plus two higher-end variants.

Volkswagen has doubled the size of its Touareg SUV range with the addition of three new trim levels, including a new entry-level model.

More on the VW Touareg:

Coming in at the foot of the range is the new SE model, which brings the Touareg's starting price down to £45,445. For that money, you get 19-inch Osorno alloy wheels, a Discover Pro 9.2-inch touchscreen infotainment system with Gesture Control and integrated voice control, as well as front and rear parking sensors. Adaptive cruise control is standard, too, as are heated front seats and a space-saver spare wheel, but customers will have to forego leather upholstery in this fabric-trimmed base model.

Also included in the price is a 3-litre V6 diesel engine with 228 bhp. However, customers can spend a little more to get the more powerful 282 bhp version of the same engine.

At the same time, Volkswagen is also bringing out a new mid-range Touareg, which sits just above the SEL variant in the line-up. Dubbed SEL Tech, the new model comes with VW's Innovision Cockpit system, which incorporates a 15-inch integrated control panel in the dash and 12.3-inch digital cockpit display in lieu of conventional dials.

The £50,995 model also comes with a power-operated tailgate, tinted windows at the back and 19-inch Tirano alloy wheels. Like the SE, the SEL Tech gets a choice of 3-litre V6 diesel engines, but the higher-spec car also gets an optional petrol engine - a 3-litre turbocharged V6 with 335 bhp.

Finally, VW is also building a new high-end version of the Touareg called the Black Edition. Priced from £58,745, it’s based on the R-Line Tech trim, but it adds a black finish to the 21-inch Suzuka alloy wheels, as well as black finishes on the radiator grille, mirror housings and side window trims.

The top-end model also benefits from a panoramic glass roof and IQ Light matrix beam headlights as standard, while air suspension is included alongside a 360-degree manoeuvring camera. As with the SEL Tech, there’s a choice of three V6 engines: two diesels and one petrol.

Brian Luckie, Touareg product manager at Volkswagen UK, said: “The Touareg is already a versatile all-rounder, combining the luxury of an executive car, the capability of a tough, off-roading SUV, the practicality of a family estate and dependability that comes built-in with the Volkswagen roundel. By offering three new trims, we’re further expanding the audience for the Touareg, injecting more variety and all-important choice into its line-up, to suit even more of our customers.”