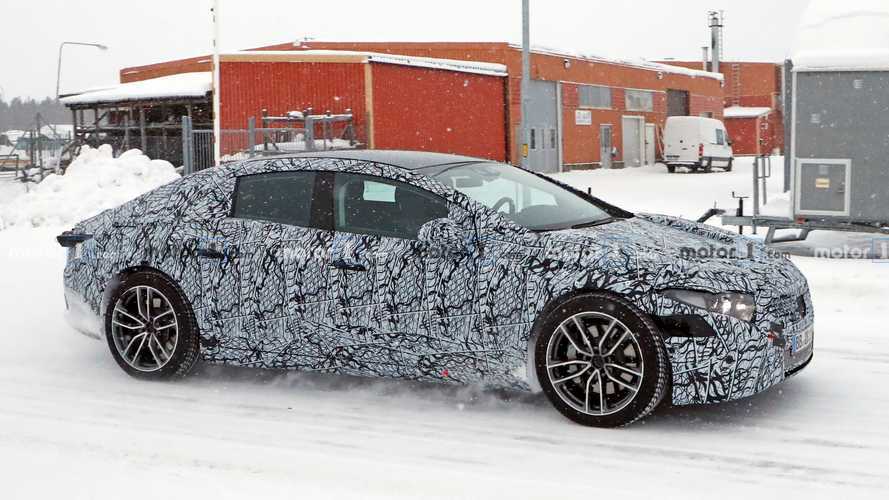 The company's flagship EV is shaping up quite nicely.

Looking as if it travelled from the future back to 2019, the Mercedes EQS is shaping up to be unlike any other car carrying the three-pointed star. Its curvaceous shape does bear somewhat of a resemblance to the CLS, but the profile is even more dramatic with the low roofline and a relatively small greenhouse. A couple of prototypes been spotted undergoing harsh winter testing, and there are a couple of things worth pointing out.

Much like the Tesla Model S it will compete with, the Mercedes EQS appears to have a more practical liftback configuration rather than the saloon layout of its other competitors, the Porsche Taycan and the forthcoming Audi E-Tron GT. Don’t worry about those rather ungainly simple taillights as they’re just provisional clusters used on early prototypes, with the final production version to have a more modern set that will expand onto the tailgate.

Eagle-eyed readers will notice the two prototypes are not identical as one has conventional door handles while other boasts those fancy pop-out handles we’ve also noticed on some of the next-generation S-Class prototypes. At the front, the bulky disguise makes the prototypes look rather unattractive, but it’s too early to jump to any conclusions about the EQS’ styling. We do notice the closed-off grille since there’s no combustion engine underneath the bonnet that would require cooling.

Images of the interior are not available in this fresh batch of spy shots, but a different prototype was caught inside at the end of October showing a dashboard layout similar to the all-new S-Class. Pictured above, the test vehicle had a generously sized digital instrument cluster and appeared to boast a large portrait-oriented touchscreen for the infotainment system similar to what Tesla has been offering on the Model S for years. The EQS concept gave us an idea of how the production model is going to look like from the inside, but obviously it won’t be nearly as high-tech as the showcar’s futuristic cabin.

Essentially the S-Class of EVs, the swoopy EQS will likely be launched in a couple of years riding on the newly developed Modular Electric Architecture (MEA). Reports are indicating it will utilise a pair of electric motors good for more than the 402 bhp and 564 pound-feet of torque available in the EQC. With one of the motors driving the front axle and the other powering the rear wheels, the sleek electric vehicle should have AWD as standard. Previous spy images depicting other prototypes have revealed rear-wheel steering will also be implemented.

When it’ll eventually hit the market, the Mercedes EQS will also have to do battle with the XJ as the next generation of Jaguar’s flagship saloon will go fully electric.