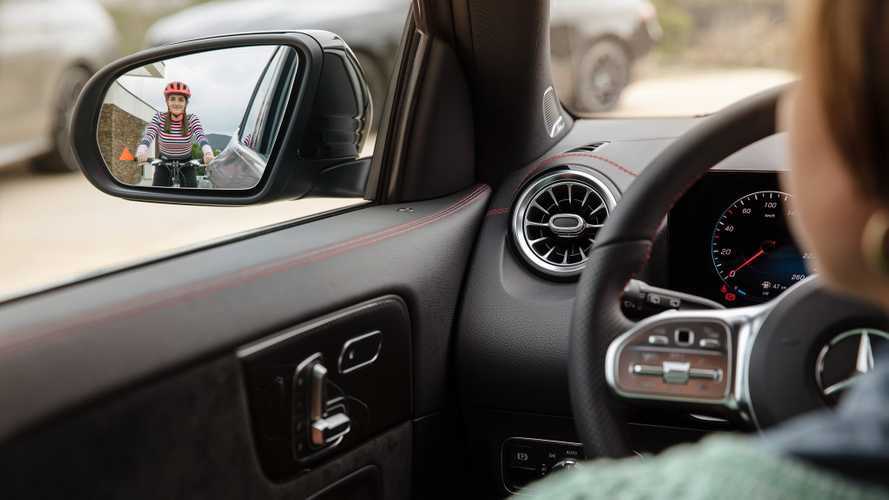 Mercedes’ teaser campaign for the second-generation GLA is in full swing ahead of the compact crossover’s official debut on December 11. Daimler’s last major reveal of the decade is a renewal of a cash cow as the company’s smallest crossover has been an immense commercial success as a result of a smart business decision to launch the GLA at the right time in an SUV-hungry market.

The latest teaser steps inside the small crossover’s cabin to partially reveal an oh-so familiar ambiance we’ve seen already in the seven compact cars launched by the three-pointed star within the last two years. The adjacent image puts the spotlight on the GLA’s safety systems, specifically on the Blind Spot Assist with exit warning functionality. How does it work? When you’re about to open the door to get out of the car, the blind spot monitor system automatically kicks once it senses another vehicle or a bicycle is approaching.

When that happens, a warning tone sounds and the warning lamp mounted in the side mirror glass lights up. Bear in mind the exit warning feature only works for three minutes after the driver switches off the ignition and is no longer available once the aforementioned warning lamp flashes three consecutive times.

The next GLA will be one of the most technologically advanced small crossovers on the market as Mercedes will cram in tech varying from active brake assist to even issuing a warning whenever pedestrians are near zebra crossings. The level of kit offered by the new CUV should be on a par with the automaker’s other premium compact crossover introduced this year, the boxy GLB. In fact, just about all the oily bits and tech will be inherited from the GLK’s spiritual successor, but without the third row as only the GLB will have seven seats.

Shorter yet roomier than its predecessor, the GLA will also be 10 centimetres taller once it’ll be unveiled during an online-only event scheduled to be livestreamed in a week from Wednesday.