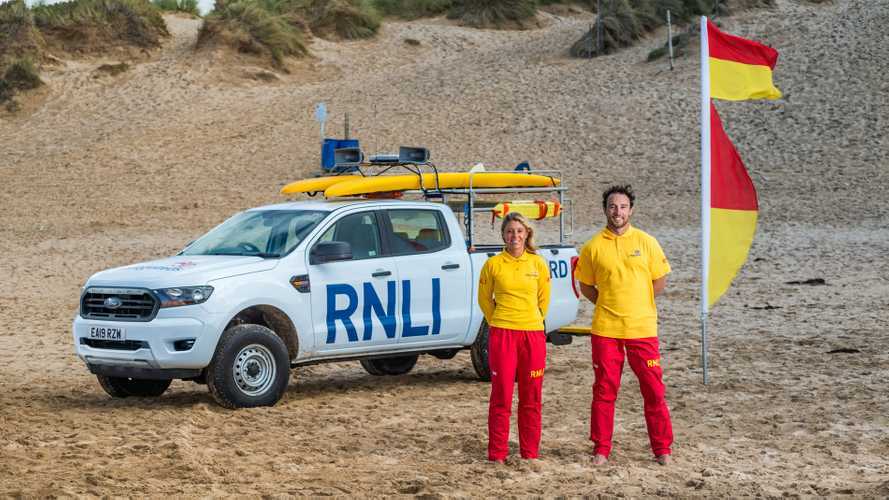 The vehicles will be used as beach patrol vehicles.

Ford has supplied the Royal National Lifeboat Institution (RNLI) with 20 new Ranger pickup trucks to use as beach patrol vehicles.

It’s part of a long-running arrangement between the American motor manufacturer and the lifeboat institution, which will see Ford ship a total of 210 new vehicles to the RNLI by the end of 2019. In 2020, that will be followed by a further 150, while 2021 will see yet another 150 vehicles join the RNLI fleet. In total, 100 Rangers will be supplied to act as beach patrol vehicles for its lifeguard service.

The latest 20 Rangers have already entered service with the charity, which offers a lifeguard service across some 240 beaches in the UK and Channel Islands. In 2018, the charity says its lifeguards assisted 32,207 people and saved 118 lives. In future, the RNLI aims to expand its lifesaving service to provide seasonal patrols to “all regions that need cover on their beaches”.

Each Ranger is a four-wheel-drive model capable of coping with the sandy and rocky beaches the RNLI has to cover, and all come with a full livery. The vehicles also get a structure over the load bed that enables the RNLI lifeguards to carry their surfboards and use the vehicle as a mobile watchtower.

The vehicles join the 2019 fleet of RNLI Fords, which will, when it is complete, also include 10 Fiestas, 10 EcoSports, 80 Focuses and 10 Kugas. There will be 80 Transits, Transit Connects and Transit Customs, too, plus the Transit Custom Plug-in Hybrid Electric Vehicle (PHEV).

“We’ve been delighted to supply vehicles to the RNLI this year and support the outstanding work they do to keep the UK coast line safe,” said Andy Barratt, Ford of Britain chairman and managing director. “We’re really excited to see our Ford Ranger being used as part of their vital beach patrols.”

And Nick Saunders, the RNLI’s senior procurement manager, said: “We’re extremely happy with our new fleet of Ford vehicles that are so well-suited to carrying out our life-saving work. We warmly welcome the new Ford Ranger to join our beach patrols and look forward to further collaboration ahead.”

The news follows Ford’s announcement yesterday that the police are trialling the high-performance Focus ST Estate and Ranger Raptor models, with a view to them joining their fleets on a full-time basis. South Wales Police are among the first to trial the enormous Ranger Raptor, which, after a ‘blue-light’ conversion by Ford’s Special Vehicle Preparation team, is designed to be used for off-road pursuits.