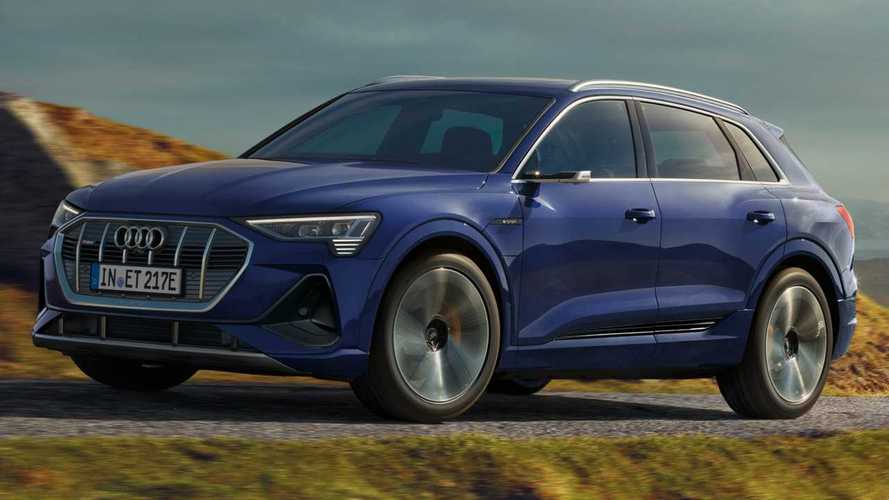 Range anxiety is becoming less and less of an issue as EV technology progresses. Advancements are being made at a rapid pace and Audi is a representative example since it’s already improving the E-Tron’s range. Even though the electric SUV made its debut in production guise a little over a year ago, the engineers have found a way to extract an additional 15.5 miles of range to bring the grand total to 270.9 miles.

While that might not be a huge improvement, we believe every extra mile counts, especially since Audi isn’t jacking up the starting price of the vehicle. It’s worth mentioning the update is being applied to the E-Tron 55 Quattro version sold in Europe, therefore the range is based on the WLTP cycle. In the UK, the model kicks off at £71,560 and is offered alongside a lesser E-Tron 50 Quattro if you’re willing to settle for 186 miles of range.

How was Audi able to increase range of the more expensive E-Tron by nearly 16 miles? By developing a new wheel brake reducing residual brake torque, which refers to the losses caused by the fact the brake calipers are located next to the brake discs. The engineers have also improved the drivetrain by deactivating the front electric motor almost entirely when the SUV is in the normal driving mode. The front-mounted motor is disconnected from the electricity supply and kicks in only when the driver needs more power.

Another significant change implemented to the E-Tron 55 Quattro variant has to do with the 95-kWh battery pack as the usable range of the battery has now increased to a net power figure of 86.5 kWh. In addition, Audi has optimised cooling furthermore to regulate temperature of the high-voltage components in a more efficient way.

One other major tweak is represented by the upgraded recuperation function, which is a big deal considering Audi says it contributes to as much as 30% of overall range. It kicks in whenever the driver releases the accelerator pedal (coasting recuperation) or when the brake pedal is depressed (braking recuperation). The former can be adjusted through one of the three selectable stages and Audi says there are now bigger differences between them and the one-pedal driving technique is more accessible than ever.

The Euro-spec Audi E-Tron is also getting an optional S Line exterior package with a sport air suspension and 20-inch alloy wheels. The kit consists of a slightly more aggressive body kit with bigger air curtains improving airflow at the front, along with a new spoiler and diffuser at the back further boosting aero. All the newly added parts that come with the S Line kit are finished in the same colour as the rest of the body.

Audi is already taking orders in Europe for the revised E-Tron.

Just in time for the premiere of the e-tron Sportback**, Audi is introducing a standard technical update for its first electric product line. This combines optimized drive system hardware with software adjustments to improve efficiency. As a result, all versions of the e-tron SUV will come off the assembly line with an extra 25 kilometers (15.5 mi) or so of range. The new models are available now to customers in Europe.

* Information on fuel/power consumption and CO2 emissions in ranges depending on the chosen equipment level of the car.

** The collective fuel consumption values of all models named and available on the German market can be found in the list provided at the end of this MediaInfo.

“Every detail counts” – that was the principle that engineers working on the Audi e-tron applied as they succeeded in extending its range yet further. Future versions of the Audi e-tron 55 quattro** will be able to drive for up to 436 kilometers (270.9 mi) on a full battery charge (WLTP cycle), which is an additional 25 kilometers (15.5 mi) over its previous capability. Thanks to a new type of wheel brake, the developers have achieved further reductions in what is known as residual brake torque. This refers to losses that occur as a result of the proximity of the brake calipers to the brake discs. The drive system has also become more efficient. In normal driving, the motor on the rear axle provides propulsion as standard. Now, thanks to a number of optimizations, the front electric motor is almost entirely disengaged and disconnected from the electricity supply. Only when the driver requests more power do both motors spring into action. Running without power or drag losses, the major advantage of the asynchronous motor concept, is even more effective as a result. In addition, the usable range of the high-voltage battery has increased. The battery in the Audi e-tron 55 quattro** has a total capacity of 95 kWh and now gives customers access to a net power figure of 86.5 kWh. All newly produced models will benefit from the technical upgrade. There is no change to prices for the Audi e-tron 55 quattro**, which start at €80,900.

The engineers have also made improvements to cooling. The highly flexible thermal management system, which comprises four separate circuits, has been revised and now regulates the temperature of the high-voltage components even more efficiently. Volume flows in the coolant circuit have been reduced, which means that the pump uses less power. The sophisticated cooling system continues to guarantee rapid DC charging, a long battery life cycle and reproducible performance even under heavy loads. The standard heat pump harnesses waste heat from the high-voltage battery to keep the interior warm. Depending on the outside temperature, that can boost the Audi e-tron’s range by up to ten percent in customer operation.

The innovative recuperation system contributes to up to 30 percent of overall range. The Audi e-tron can recover energy in two ways: by means of coasting recuperation when the driver releases the accelerator, or by means of braking recuperation when the brake pedal is depressed. In both cases, the electric motors function as generators and convert kinetic energy into electrical energy. During deceleration actions of up to 0.3 g – which applies to over 90 percent of such actions in everyday driving – the high-voltage battery is charged by the electric motors, which act as generators. The recuperation system provides for variable regulation of energy recuperation between both electric motors, both in coasting mode and during braking. The degree of coasting recuperation can be set to any of three stages by means of paddles on the steering wheel, and there are now greater distinctions between the three, which allows the driver the option of a more pronounced “one-pedal feeling.” When braking from 100 km/h (62.1 mph), the Audi e-tron can recuperate up to 300 Nm (221.3 lb-ft) and 220 kW. That corresponds to more than 70 percent of its operating energy input.

The S line exterior package emphasizes the sporty DNA of the Audi e-tron. The new equipment version is available now and features 20-inch wheels and sport air suspension. The more distinctively contoured bumper is flanked by bigger and more expressive air curtains, which improve air flow. They extend below the headlights, thereby creating a dynamic appearance even from a distance. An S line emblem adorns the radiator grille, while the illuminated aluminum door sill trims feature an #S logo. The spoiler fitted as standard and a striking diffuser at the rear contribute to the outstanding aerodynamics of the e-tron Sportback. In contrast to the basic model, the attachments on the S line exterior are painted in the exterior body color, including the wheel arch trims, door sills, bumpers and exterior mirrors. The optional black styling package also accentuates the area of the Singleframe, the side windows and the bumper. The exterior mirror housings are also available in black as an option.