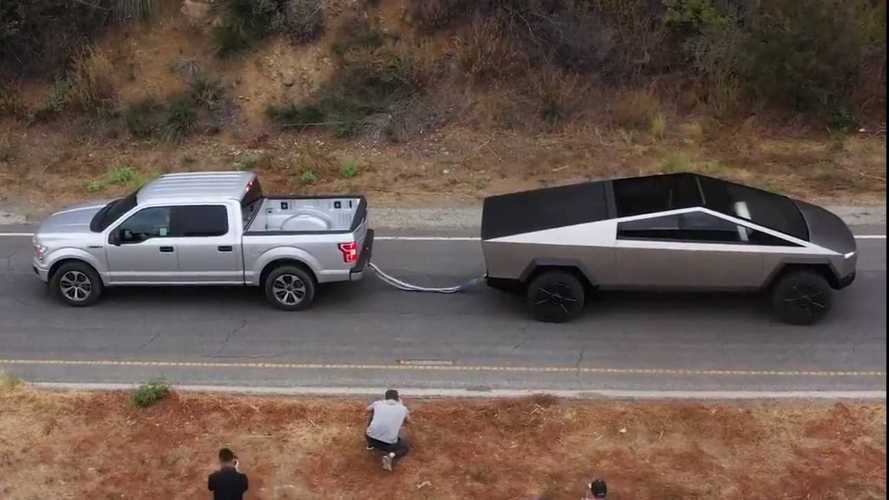 Ford says it was a "tongue-in-cheek" response to Tesla’s test. Tesla says, “Bring it on.”

During the Tesla Cybertruck reveal last week, the electric automaker played a video showing the Cybertruck facing off against a Ford F-150 in a tug-of-war. The Tesla won, but we questioned if the tug-of-war was a fair, apples-to-apples comparison. A tweet from Sundeep Madra, vice president of Ford X, appeared to challenge Tesla to a rematch. However, a senior Ford spokesperson told Motor1.com that Madra’s tweet was “tongue-in-cheek” and meant to point out the absurdity of Tesla’s tow video.

The video, which Tesla CEO Elon Musk shared on Twitter over the weekend, shows at least a mid-range Cybertruck squaring off against a Ford F-150 of uncertain performance. Our analysis concluded the Tesla truck packed at least Tesla’s dual-motor, all-wheel-drive setup. However, it could have been the range-topping tri-motor truck capable of sending the Cybertruck to 60 miles per hour in 2.9 seconds.

The F-150 appeared to be the STX trim based on the grille, door handle, and wheel designs. Once the tug-of-war begins, the F-150’s rear tyres spin, which likely means it's the rear-wheel-drive model. That would make the 2.7-litre EcoBoost the likeliest engine under the truck’s bonnet. It produces 325 bhp, but it can’t rocket the F-150 to 60 in under three seconds. Telsa also weighs more, too, giving it an advantage.

Learn more about the Tesla Cybertruck:

It’s doubtful Tesla’s tug-of-war test was an apples-to-apples comparison. However, it’ll be all apples and oranges until Ford debuts the electric F-150. That'll be an accurate evaluation of each brand’s pickup truck. There's no doubt the Cybertruck made a splash last week with impressive performance specs, a wild design, and ambitious promises. Will it be enough to dethrone Ford or the other domestic automakers that dominate the pickup truck market? A tug-of-war doesn't win market share.