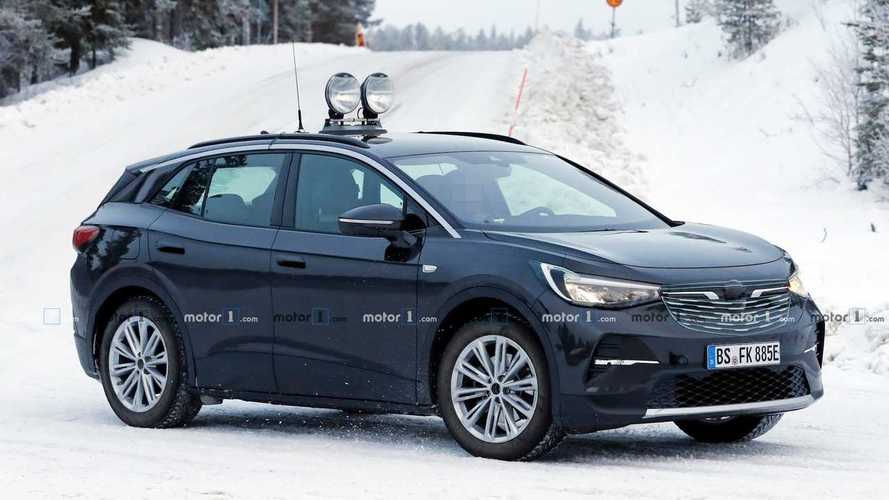 The camo makes it a bit tough to...ID.

Volkswagen’s upcoming electric crossover SUV is one step closer to reality, as evidenced by this near-naked prototype our spy photographers caught frolicking in the snow. The production-ready version of the ID. Crozz is slated to debut next year and is expected to don the name ID.4.

Unlike the coupe-like Crozz, the ID.4 sports a more traditional crossover shape with a relatively flat roofline and an upright rear hatch. While this mule’s limited camo results in it sporting a Vauxhall/Opel-like grille and headlights, the production model will wear a mug that’s distinctly Volkswagen, as evidenced by the barely camouflaged prototype the company teased in China.

Like its smaller sibling, the ID.3, the ID.4 rests on Volkswagen’s MEB electric vehicle architecture. Power is to come from either a single rear-axle motor or an available second motor at the front-axle motor, the latter of which blesses the crossover with all-wheel drive. Given the snowy conditions, we’d wager the ID.4 spied here is a dual-motor model.

The European-built EV is expected to go on sale at the end of next year. Volkswagen also plans to build the ID.4 at its Chattanooga, Tennessee plant within a few years of the vehicle’s launch.

At a roundtable interview at the Los Angeles Auto Show, Scott Keogh, CEO and president of Volkswagen Group of America, noted that the Chattanooga factory can handle EVs with 62- and 82-kilowatt-hour battery packs, which leads us to believe the U.S.-bound ID.4 will offer customers both energy storage options. The latter pack was recently shown in the ID. Space Vizzion concept and affords the wagon a reported 300 miles of driving range.

Although we don’t expect the ID.4 match the performance of the sleeker Space Vizzion, we believe Volkswagen's upcoming crossover will offer more than 250 miles of driving range when equipped with the 82-kWh battery pack.