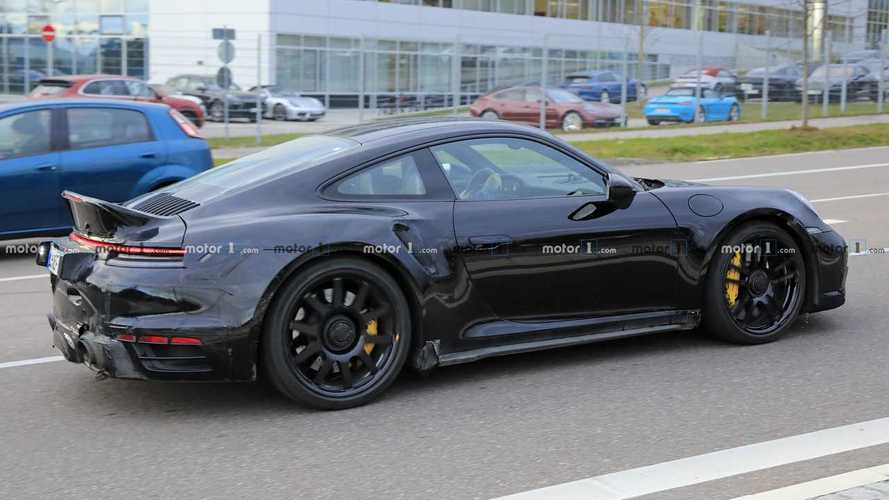 We are still several months away from the debut of the next-generation Porsche 911 Turbo S but we’ve already seen quite a few prototypes of the model testing on public roads and race tracks. Today we uncover yet another test car but this time around it’s a rather interesting machine that caught our photographers’ attention in Stuttgart.

Almost everything looks as expected here except for the small fixed rear wing at the back. It’s what many describe as a duck tail spoiler and is something we’ve seen on the so-called Sport Classic series of the German manufacturer. The big difference here is that this car seems to be based on the upcoming 911 Turbo S, whereas the previous 911 Sport Classic used the Carrera S model as a foundation.

Just as a reminder, the 911 Turbo S prototypes we’ve seen so far feature an active rear wing, which is significantly larger than the fixed spoiler seen on this test car (see comparison above).

We have a few different theories as to what’s in the cards for the current generation of the 911 (992). One very plausible option is that Porsche will simply use the Turbo S for a base of a new Sport Classic series, which could be highly limited to a few hundred examples. On the other hand, an even hotter 911 Turbo – which we will theoretically call the Turbo RS for now, could be planned. A modern-day Carrera RS in the same vein as the car with that name from the 1970s also seems possible.

Whatever the case is, we should know more next year. According to recent information, the new 911 Turbo S will debut in the spring of 2020 when it will unleash its mighty 3.8-litre twin-turbo flat-six engine. Word on the street is we will be dealing with 641 bhp and 590 pound-feet, but – of course – nothing is official at this point.