It's going to be a long teaser campaign considering it won't debut until May 2020.

More than 6,000 miles away from the Los Angeles Auto Show where all the action is happening today, Maserati has released its own “spy shots” of an all-new sports car driven out of the Viale Ciro Menotti gates in Modena, Italy. The vehicle you’re looking at is only an early test prototype covered up in an extensive amount of camouflage since the official reveal is several months away – May 2020.

Naturally, since there’s still a long way to go until it debuts, Maserati is being coy on details. We do know the engine is being developed entirely in-house, which is not surprising considering Ferrari announced earlier this year that its deal with the Trident brand to supply engines would not be renewed. The 100% Maserati engine is described as being the “forefather of a new family of engines integrated exclusively on the vehicles of the brand.” In other words, you won’t be seeing this powertrain in any other model within FCA (and PSA).

Whether it will be called Alfieri or not remains to be seen, but we do know from our colleagues at Motor1.com Italy the engine in question will be a six-cylinder unit. Other technical specifications remain shrouded in mystery, but at least we finally now Maserati is working on an entirely new model after recently axing the ageing GranTurismo and GranCabrio.

It would be futile to talk about the test prototype’s design since it carries a lot of disguise and probably lacks all of the production bits. That said, we can clearly see the mid-engined layout with large side vents in front of the rear wheels to cool down the powertrain. It sort of resembles an enlarged Alfa Romeo 4C, but perhaps the camo is playing tricks on us. 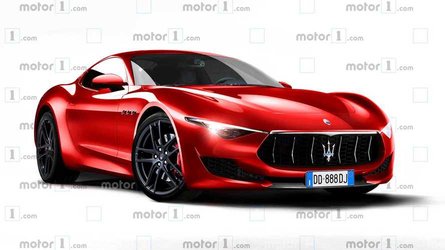 Maserati hints at new model reveal set for May 2020

Prepare for an extensive teaser campaign prior to the full reveal of the highly anticipated all-new sports car, which according to Maserati’s recently updated product roadmap will also be offered with a pure electric powertrain.