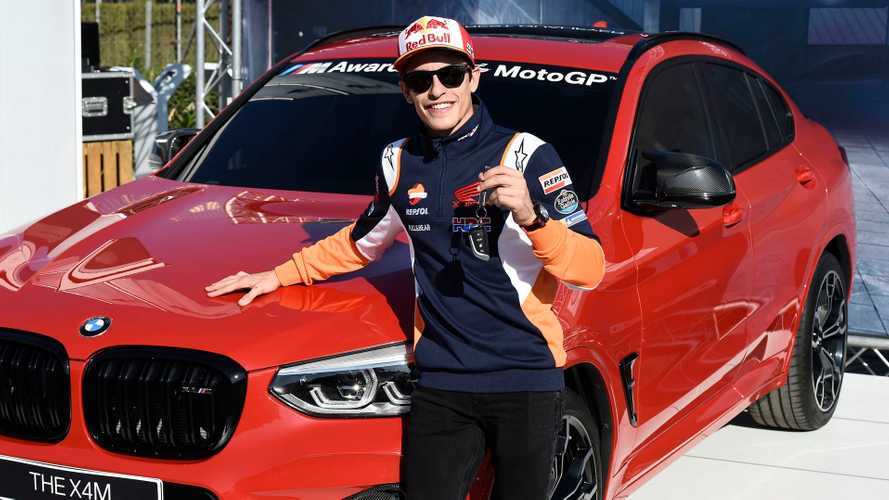 Exactly one year ago, Marc Marquez took delivery of a shiny brand new BMW M3 CS as a reward for his amazing season in the pinnacle of motorcycle racing, MotoGP. Today, we can report that the 26-year-old Spanish motorcycle racer has received yet another BMW M award in the form of a new X4 M Competition. Not that we are counting, but this is his seventh BMW.

The performance crossover was handed to Marquez during the Valencia GP by Carmelo Ezpeleta, CEO of MotoGP commercial rights holder Dorna Sports, Markus Flasch, CEO of BMW M, and Manuel Terroba, CEO of BMW Group Spain and Portugal. In 2019, Marquez became the fastest qualifier in MotoGP for the seventh consecutive year.

“I would like to thank BMW M for the great way in which they have recognised our performances at the track for many years, and how they reward the season’s best qualifier,” Márquez commented after getting the keys for his new ride. “I am a bit speechless to have received this award for the seventh year in a row. I am delighted to have been the fastest qualifier this year because it’s not been easy and can hardly wait to get in the car.”

As for the car itself, the X4 M Competition has a 3.0-litre inline-six turbo engine with 503 bhp and 442 pound-feet of torque. The motor teams up with an eight-speed automatic transmission and an M-tuned xDrive all-wheel-drive system.

Valencia. Marc Márquez remains in a class of his own: This season, the Spaniard was crowned world champion for the eighth time in total, and the sixth time at the pinnacle of motorcycle racing - MotoGP. And there is simply no beating Márquez when it comes to the coveted BMW M Award either. In 2019, he was the fastest qualifier in MotoGP for the seventh year in a row, extending his record winning run in the BMW M Award.

Since 2003, the BMW M Award has been one of the pillars of BMW M GmbH’s commitment to the series as “Official Car of MotoGP”. At the end of each season, BMW M GmbH rewards the rider who has amassed the most points in MotoGP qualifying with an exclusive BMW M high-performance automobile. The prize is traditionally presented on the Saturday of the MotoGP finale in Valencia. The prize car in 2019 is a BMW X4 M Competition (combined fuel consumption: 10.5 l/100 km*; combined CO2 emissions: 239 g/km*) in Toronto Red Metallic. It was presented to Márquez in Valencia by Carmelo Ezpeleta, CEO of MotoGP commercial rights holder Dorna Sports, Markus Flasch, CEO of BMW M GmbH, and Manuel Terroba, CEO of BMW Group Spain and Portugal.

The BMW X4 M Competition is one of the models with which BMW M GmbH has expanded its offering of high-performance cars in the sports activity vehicles and sports activity coupés sectors. In the BMW X4 M Competition, the most powerful straight-six petrol engine ever seen in action in a BMW M car provides the muscle for stunning performance attributes. The newly developed high-revving unit with M TwinPower Turbo technology generates maximum output of 375 kW/510 hp from its 3.0-litre displacement, together with peak torque of 600 Nm (442 lb-ft). The new high-performance engine teams up with an eight-speed M Steptronic transmission with Drivelogic and uses the new M xDrive all-wheel-drive system to channel its power to the road. The BMW X4 M Competition sprints from 0 to 100 km/h (62 mph) in 4.1 seconds. Among the other highlights of the prize car’s exclusive, sporty equipment are the M Competition package, the M Sport exhaust system, and the carbon exterior package.

“I would like to thank BMW M GmbH for the great way in which they have recognises our performances at the track for many years, and how they reward the season’s best qualifier,” said Márquez at the presentation ceremony in Valencia. “I am a bit speechless to have received this award for the seventh year in a row. I am delighted to have been the fastest qualifier this year because it’s not been easy and can hardly wait to get in the car.”

“This event on the Saturday afternoon in Valencia is now a permanent fixture on my calendar. Since 2003, the BMW M Award has been an important part of MotoGP, and the presentation ceremony at the season finale is always something special,” said Carmelo Ezpeleta, CEO of MotoGP commercial rights holder Dorna Sports. “The fact that we are stood here with Marc Márquez for the seventh time in a row is also rather special. Congratulations, Marc. He came out on top again this year and can now deservedly call this exclusive BMW X4 M Competition his own. In its selection of the prize cars, BMW M GmbH demonstrates every year just how important it is to them to acknowledge the performances of our riders. It also shows how important the partnership with MotoGP is – a long-term and strong partnership, as this was our 21st season together. The BMW X4 M Competition is the latest in a long line of fantastic prize cars. I am sure that Marc will have a lot of fun with it.”

“It has pretty much become a tradition to present Marc Márquez with the BMW M Award here in Valencia,” said Markus Flasch, CEO of BMW M GmbH. “To win this coveted award seven times in a row, and in such a high-class field as the one in MotoGP, is an outstanding and unique achievement. Congratulations on this record run, which started back in 2013. We are delighted to be able to present him with this exclusive BMW X4 M Competition as his prize – a sporty, high-performance car and a real powerhouse, whose attributes are perfectly suited to an exceptional athlete like Marc. We hope he has a lot of fun driving it.”

The BMW M Award was presented for the 17th time in 2019. As with the scoring system for the race, the riders receive points for their positions in qualifying at each Grand Prix weekend. The rider who has picked up the most points at the end of the season wins the coveted BMW M Award, in the form of an exclusive BMW M automobile. Márquez has already made history several times with the BMW M Award. He won it for the first time in 2013, becoming the first rookie to top the ranking. In 2015, the Spaniard became the first rider to win the BMW M Award for three consecutive years. He became the exclusive record holder in 2016 with his fourth straight victory. In the current 2019 season, Márquez won the BMW M Award with a total of 384 points, 50 points ahead of his closest challenger Fabio Quartararo.