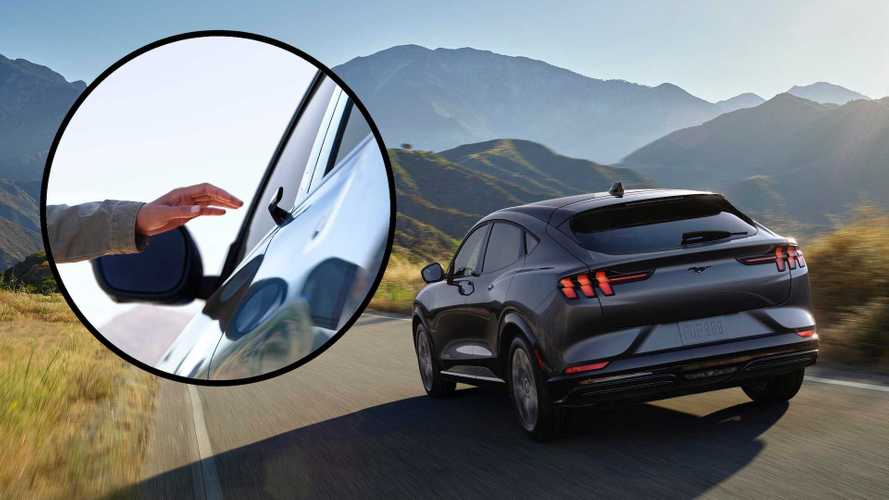 Walk up to the Ford Mustang Mach-E and you might notice something odd: this car has no door handles. You won't find the same electronic pop-up handles that sit flush with the body, like the ones offered on the Tesla Model X or Jaguar I-Pace. Rather, the Mustang Mach-E takes a different approach.

Passengers access the Mach-E's cabin via electronic buttons located on the upper portion of the vehicle's B- and C-pillars. Push them, and the doors pop out about an inch. The front two doors have sleek, piano black pull handles to help the driver and front passenger open their respective door fully, but rear passengers must stick their fingers into a small opening and grab the hem of the door to access the second row. As Gordon Platto, the Mach-E's interior and exterior design director, tells us, "it's mostly kids sitting in the back seat anyway." So, no need for additional pull handles.

Though the over-engineered doors may sound silly at first, there are a few good reasons why Ford decided to ditch the traditional exterior handle. For one, the Ford Mustang Mach-E (as with many of its electric competitors) emphasises efficiency. Tacking oversized door handles onto the svelte design reduces the coefficient of drag, thus limiting the overall driving range. Ford doesn't give us an exact figure in regards to the Mach-E's coefficient of drag, but the company claims it’s less than 0.30, which puts Mustang-badged EV squarely in competition with other EVs like the Tesla Model X (0.25 Cd), Audi E-Tron (0.28 Cd), and Jaguar I-Pace (0.29 Cd).

Not only did Ford designers focus on efficiency when styling the profile of the Mach-E, they also wanted to make the car feel wholly modern by highlighting the Mach-E's futuristic capabilities. Clunky, traditional door handles, according to Ford, are a thing of the past. The electronic latches give the Mustang crossover a unique, modern feature that you won't find on many competitors.

But at its core, the Mach-E is still a Mustang. And the unique door handles – or rather, lack thereof – emphasise the Mach-E's emotional characteristics more distinctly. As Platto notes, "the Mustang Mach-E carries many key characters from the Mustang coupe – an emotional design with a strong rear haunch, front and rear tri-bar lamps and muscular surface development with deep sculpting."