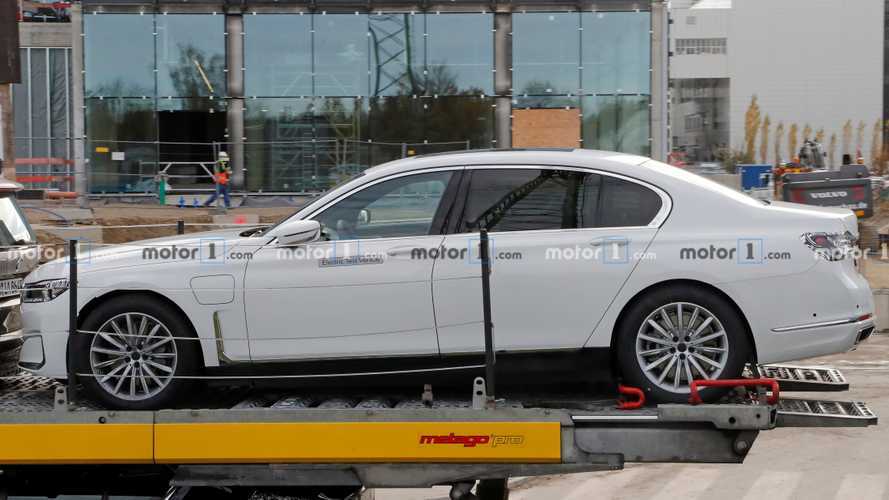 No mystery here, it literally says "electric test vehicle" on the driver's door and rear bumper.

German automakers are finally kicking their EV ambitions into high gear by developing a slew of zero-emissions vehicles across multiple segments of the market. Audi has said it will consider a pure electric version of its next-generation A8 fullsize luxury saloon, while Mercedes has already been spotted testing the equivalent of an S-Class without a combustion engine, dubbed EQS. As for BMW, this fresh batch of spy shots strongly suggests the 7 Series will also spawn an EV derivative.

It’s certainly too late in the model life cycle of the current generation 7er, so we strongly believe BMW is preparing the next iteration of its range topper to accommodate electric motors and batteries. Taking into account the large saloon you see here is only a test mule carrying the current model’s body, it means there’s a lot of work that needs to be done before the EV is ready to hit the assembly line.

How do we know it’s electric and not just simply a long-wheelbase 745e without the M Sport package as you’d be tempted to believe? Well, it literally says so on the driver’s door and the rear bumper – “electric test vehicle.” Yes, the angular exhaust tip is still there, but it’s not connected to anything. We’re puzzled by the fact BMW partially camouflaged the headlights and taillights, but maybe the company is testing out new tech. We’ll ignore the yellow seatbelts inside what looks to be cream interior as it’s not relevant to the story, although worth pointing out.

These spy shots come at the right time as a report from late July focused on the possibility of an electric 7 Series dubbed the “i7” like Intel does with its high-end CPUs. The same source followed up on its original report several months later to mention a hotter i7S with as much as 670 bhp and a larger 120-kWh battery pack good for approximately 360 miles based on WLTP.

The electric i7 is shaping up:

The non-S version of Bavaria’s electric crown jewel is said to boast roughly 550 bhp and a slightly smaller 100-kWh battery, although the range is believed to be the same. Both are said to make use of dual electric motors enabling an all-wheel-drive layout and feature a fast-charging system, presumably through an 800V architecture in the same vein as Porsche is doing with the Taycan.

The current-generation 7 Series will probably be replaced by a new model in a couple of years, and assuming its electric counterpart will come out at a later date, it means the i7 won’t be released before 2022 at the earliest.