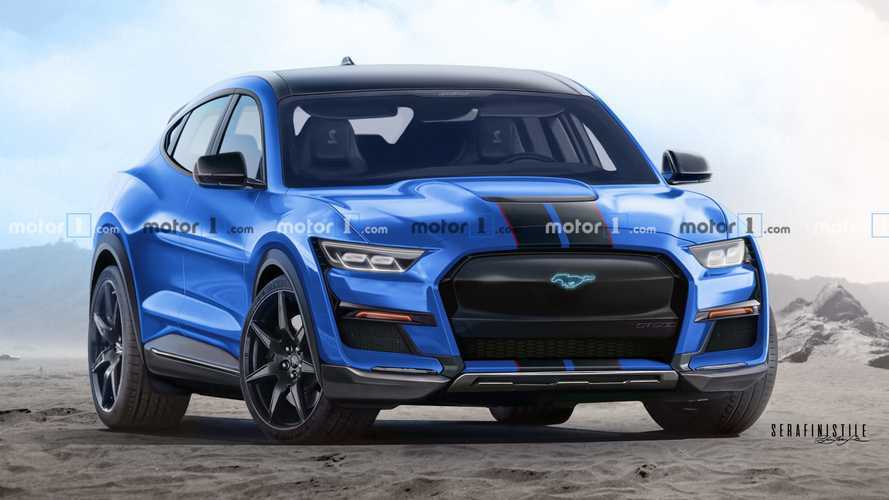 Shelby all the things!

Is this really inevitable? Possibly, but before the Shelby fans of the world send us hate mail over these GT500-esque renderings of the new Mustang Mach-E, let us revisit some Shelby history. Yes, the iconic stripes and branding are synonymous with the Mustang, but these days you can also get a Shelby F-150 pickup and once upon a time, Shelby badges adorned turbocharged front-wheel-drive Dodge hatchbacks in the 1980s. In the grand scheme of things, then, a Shelby-branded electric crossover might not be so bad.

The Mach-E is here:

Actually, we’re rather impressed with the way these renderings came out. It’s not like the Mach-E is completely unrelated to the Mustang, so dialling in some GT500 flavour is easy. The squared-off front clip is a good look for this EV crossover, and yes, we’re well aware that a power bulge bonnet on an electric car makes as much sense as a vegan crocodile. It still looks brilliant though, and in this instance, the extra space can offer a bit more frunk storage as opposed to clearance for a non-existent supercharger.

As for performance, Ford already has a GT model of the Mach-E planned for 2021 that will rival the current Shelby GT500, at least in a sprint to 60 mph. The 760-bhp muscle car gets there in 3.3 seconds, while the Mach-E GT is shooting for a time in the mid-3-second range. Juicing the battery for a proposed Ford Shelb-E model could see this crossover cut a full second off that time. Would you feel better about a Shelby-branded electric SUV that could hit 60 mph in 2.5 seconds and rip a 10-second quarter-mile?

Admittedly, this Shelb-E creation is just a flight-of-fancy on our part but it could well preview the future of performance. Electric power is here to stay, and there’s no denying the performance potential of instant thrust with right now torque that electricity can offer. So why not add some stripes and a Shelby badge and just have some fun?