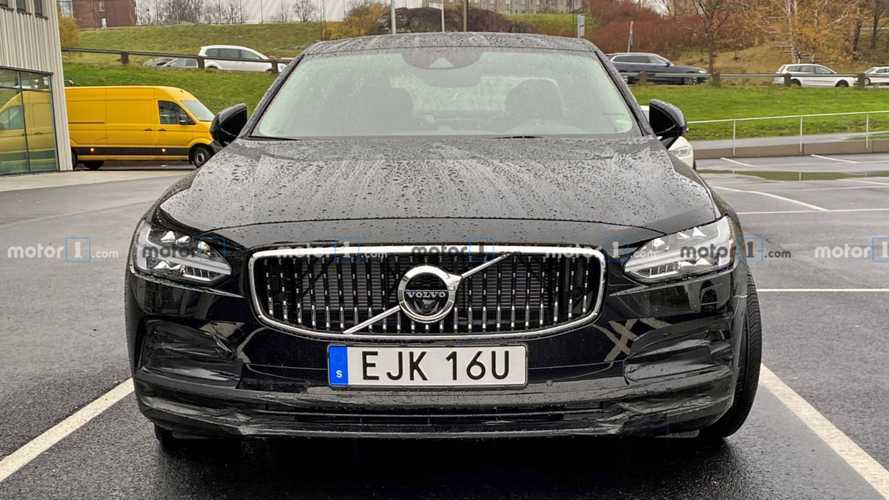 A new lower fascia and revised lighting are among the more noticeable revisions.

The Volvo S90 has an update on the way, and these spy shots provide a close look at the tweaks. Unfortunately, the company keeps the revised parts under black concealment over the black body.

Compared to the existing S90 (see the slider tool below), this revised model wears a tweaked lower fascia, but the covering over it hides the styling changes. The general shape appears to be the same, so don't expect a major design overhaul. The grille features a more textured design. The headlights have the same silhouette, but the lamps on the inside appear to be slightly different by making the LEDs more prominent.

The revisions at the back are also tiny. Volvo conceals the taillights, but there are new lamps with a new position for the reverse light. The company also hides the exhausts, but the bumper and boot designs look the same.

The facelifted S90 should gain the kinetic energy recovery braking system from the refreshed XC90. On the crossover, the company claims the tech can offer 15 percent fuel savings in real-world driving, so the efficiency improvement should be similar for the saloon.

There's no info about other powertrain changes but expect the S90 to follow Volvo's increased adoption of hybrid and PHEV tech. The company intends to no longer offer diesel engines within the next five to six years.

New Volvos on the way:

Starting in 2020, all Volvos will have a top speed of 112 mph. The company is also working on tech that would automatically restrict a vehicle's speed in school zones and around hospitals, but this feature isn't ready for production models yet.

An exact debut date for the updated S90 is a mystery. Look for it to arrive in 2020.