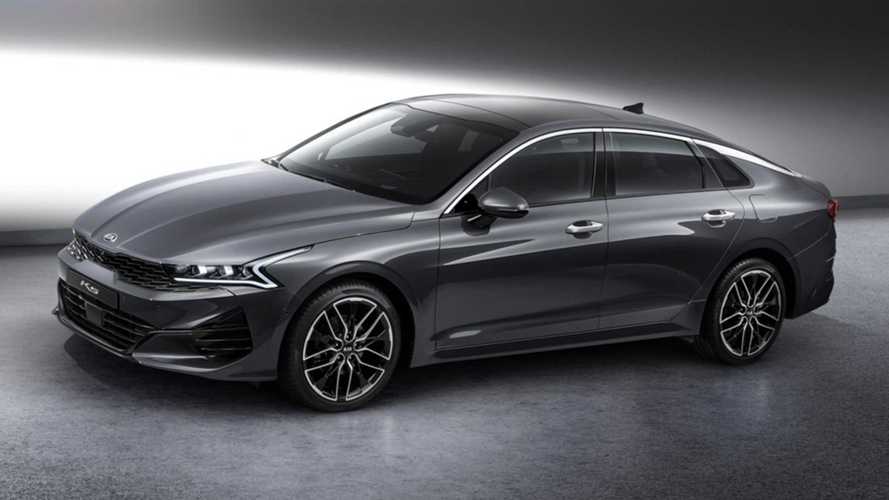 Further proof the South Korean brands are on a roll when it comes to designing cars.

No more teasers – this is the real deal. After Hyundai took the midsize saloon segment by storm with its gorgeous new Sonata, Kia is looking to do the same with the mechanically related Optima. What we have here are official images of the K5 version destined to be sold at home in South Korea where it will go on sale next month. The jury is still out on when the European and North American versions of the Optima will be unveiled, but we have a feeling these will look virtually the same as the KDM-spec model.

The numerous teasers released in the build up to the car’s reveal have left very little to the imagination, but it’s nice to finally see the new Optima in all of its glory. We still have a soft spot for those quirky LED daytime running lights derived from the Cadenza, and we’re also particularly fond of the new taillights stretching across the entire width of the car.

The sloping roofline might tempt you to believe the new K5 / Optima has been turned into a more practical liftback, but it’s still a saloon with a boot lid. Interestingly, Kia mentions its all-new development of the car boasts frameless windows and we can observe the chrome accents on the side profile reminiscent of the previous generation now continue at the back to surround the rear window.

Bigger than the model it replaces, the new Optima has been elongated by 50 millimetres to 4905 mm and widened by 25 mm to 1860 mm, while the height has been lowered by 20 mm to 1445 mm to enhance the fastback silhouette. It should prove to be roomier on the inside as a result of a longer wheelbase now measuring 2850 mm or 45 mm more than before.

The base versions of the K5 will be available in South Korea with 16-inch alloy wheels, but customers will be able to upgrade to 17- or 18-inch alloys and even 19-inch rims on the more expensive trims. These will be available with multiple finishes, including light or dark grey and glossy black.

Kia isn’t willing to show the cabin just yet, but the adjacent teaser image suggests some big changes are planned in a bid to push the Optima more upmarket and echo the Sonata. With the KDM-spec K5 scheduled to go on sale in December, it means we won’t have to wait much longer to see the interior and learn about the technical specifications, which should mirror those of its sister model from Hyundai.

Kia Motors has today published exterior images of the all-new Kia K5 sedan. Released in Korean market specification, the latest model offers a fresh and innovative new look for the sedan segment and showcases Kia’s bold new design direction.
The new Kia K5 brings with it a sporty, modern and bold character. The front of the car is characterized by Kia’s imposing new ‘Tiger Nose Evolution’, a wide, three-dimensional design which integrates the grille and headlamps more organically than previous iterations of the K5. The texture of the grille is modelled on the texture of shark skin which has powerful and sporty image. The grille is made with a matrix of interlocking details to give the K5 a classy and dynamic look. The K5’s new front headlamps feature a distinctive ‘heartbeat’ daytime running light signature.
Above the grille, the deeply-contoured hood and characteristic lower bumper, emphasizing the smooth lines on the front of the car and enhancing the K5’s on-road presence.
The profile of the K5 displays a greater sense of muscularity than its predecessor, with the body narrowing slightly at the midpoint between wheel arches. A distinctive crease runs the length of the K5’s body, while a dash of chrome above the car’s new frameless windows adds greater drama to its flowing, fastback roofline.
The all-new K5 is longer and wider than its predecessor. The length of the new model has been extended by 50mm to 4,905mm and the width by 25mm to 1,860 mm. The wheelbase is extended to 2,850mm providing a stable driving character. A 20mm drop in height to 1,445mm creates a low-slung sporty profile.
The back of the K5 has a new rear-combination lamp design which provides a sporty silhouette mirrored by the three-dimensional design of the K5’s subtle rear wing. The unique rear light signature mirrors the slender ‘heartbeat’ motif found at the front of the car, while the flash of chrome from the roofline loops around the base of the rear screen, unifying the side and rear profile.
The K5 will be available with a range of new 19-, 18-, 17- or 16-inch machine-cut aluminum alloy wheel designs with from gloss black to dark gray and light gray.
The new-generation K5 will go on-sale in the brand’s domestic Korean market in December.