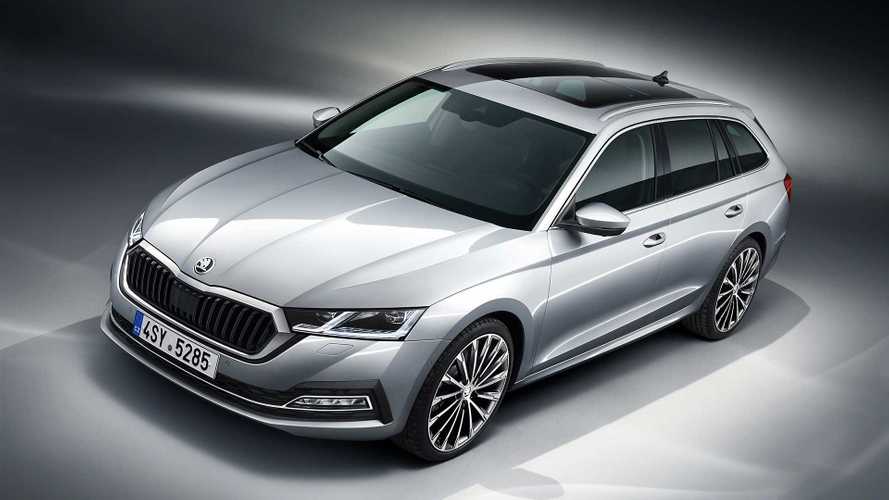 Longer and wider than its predecessor, the new Octavia reinforces its position as one of the largest cars in its class.

We’ve seen our fair share of preview images depicting the new Octavia as Skoda had an unusually long teaser campaign for its best-selling product, but now the wait is finally over. It’s a rather busy day for the VAG brand as not only are they showing the estate prominently featured in the teaser campaign, but also the standard liftback and their plug-in hybrid derivatives carrying the “iV” badging.

Debuting at a standalone event in Prague, the Octavia 4 (fifth if you’re counting the 1959-1971 model), follows in the new Volkswagen Golf’s footsteps revealed last month. The Czech sibling of Europe’s best-selling car continues to be at the higher end of the compact segment when it comes to size as the liftback is now 19 mm longer and 15 mm wider than before, at 4689 mm and 1829 mm, respectively. The Combi – which is Europe’s best-selling estate – has also been stretched (+22 mm) and widened (+15 mm) and it now has the exact same length as the liftback. Both share a generous wheelbase measuring 2686 mm or the same as before.

The increased footprint might not seem such a great idea if you plan on using the Octavia 4 in the city seeing as how the previous car was already quite large, but there are some benefits. For example, the liftback’s cargo capacity has increased by 10 litres to 600 while the estate’s has jumped by 30 litres to a massive 640 litres. In addition, kneeroom for rear passengers is better than ever – at 78 mm or 5 mm more than the model it replaces.

Beauty is in the eye of the beholder, but with the Octavia 3 facelift being heavily criticised for its “four-eye” look, we have a feeling many are happy with Skoda’s decision to revert to regular headlights. Optionally available with matrix LED technology, the headlights are sleeker than those of the old model and lend the car a high-tech look. Fog lights akin to those of the facelifted Superb are noticeable at the front, while the corporate grille now has more edges than before.

Additional versions are coming next year:

The side profile hasn’t changed all that much, but Skoda does mention there are new 19-inch alloy wheels available and fresh hues known as Crystal Black, Lava Blue, and Titanium Blue. In addition, buyers will be able to opt for Chrome and Dynamic packages, while the estate will boast redesigned shallow roof rails. Interestingly, drag coefficient has been reduced to 0.24 for the liftback and 0.26 for the estate for the sake of improving fuel efficiency and reducing emissions. Go for one of the two plug-in hybrid versions and there will be an extra cap on the front wing to conceal the charging port.

Moving at the back, the Scala-esque taillights enable a more modern look and at the same time accentuate the Octavia’s increased width since the clusters now extend on the tailgate for the first time. The full-LED taillights benefit from dynamic indicators and do a little “dance” together with the front lights whenever the car is locked/unlocked as seen on Audis.

Other changes noticeable at the back include the gently sloped boot lid of the liftback and the somewhat questionable decision to remove the corporate badge and replace it with a large “SKODA” logo. The estate boasts a large roof-mounted spoiler and comes as standard with a rear wiper, but you’ll have to pay extra to install it on the liftback.

Stepping inside, the revolutionary changes VW has made to the Golf have a correspondent in Octavia as Skoda’s core model has a completely new dashboard similar to the one installed in Wolfsburg’s popular hatchback. Gone is the neatly integrated touchscreen for the infotainment system as there’s now a tablet-like display on top of the dashboard, positioned to the right of the instrument cluster.

The digital driver’s display measures 10.25 inches whereas the infotainment system varies from 8.25 to 10 inches, depending on the level of equipment. Right below the main display on the centre console is a touch bar providing quick access to adjust some of the settings like audio volume or the navigation map’s zoom.

The fancy two-spoke steering wheel is making its debut on a production Skoda and provides the driver with access to 14 different functions. Opt for a model equipped with the automatic transmission and the chunky gear lever of the previous Octavia will be replaced by a small selector thanks to the adoption of shift-by-wire tech inherited from the Golf. LED ambient lighting on the door cards and the dashboard will be offered in 10 selectable colours, as will be a newly developed optional Canton sound system, and up to five USB-C ports complemented by a 230V power outlet.

As far as the oily bits are concerned, the engine lineup obviously mirrors that of the new Golf. It starts off with a three-cylinder 1.0 TSI petrol unit developing 108 bhp and 148 lb-ft, which you can have with mild-hybrid tech. The four-cylinder 1.5 TSI is rated at 148 bhp and 184 lb-ft and is also available in an electrified variant, with both carrying the “e-TEC” badge.

On the diesel side, the 2.0 TDI will be available with 114 bhp, 148 bhp, and 197 bhp, with either a six-speed manual or a seven-speed DSG. Torque for the diesel can go as high as 295 lb-ft for the all-wheel-drive model, which will complete the sprint in 7.1 seconds.

Then there’s the 1.5 TSI G-TEC, which is Skoda’s way of referring to the version developed to run on compressed natural gas (CNG). It uses a four-cylinder mill hooked up to a six-speed manual or a seven-speed DSG sending 128 bhp and 148 lb-ft to the wheels.

Much like the Superb iV and Golf GTE, the new Octavia will be offered with a plug-in hybrid system rated at a combined 201 bhp and 258 lb-ft courtesy of a 1.4 TSI petrol engine and an electric motor. It’s been engineered to work with a six-speed DSG and a 13-kWh battery pack offering an electric range of 34 miles based on WLTP. Bear in mind that going for the PHEV model will have a negative impact on cargo volume, which will drop to 450 litres for the liftback and to 470 litres for the estate.

The long-roof model will be the first to go on sale since it’s the more popular body style, with the liftback to follow a few weeks later. The rugged Scout and the sporty RS have already been confirmed for a 2020 release.