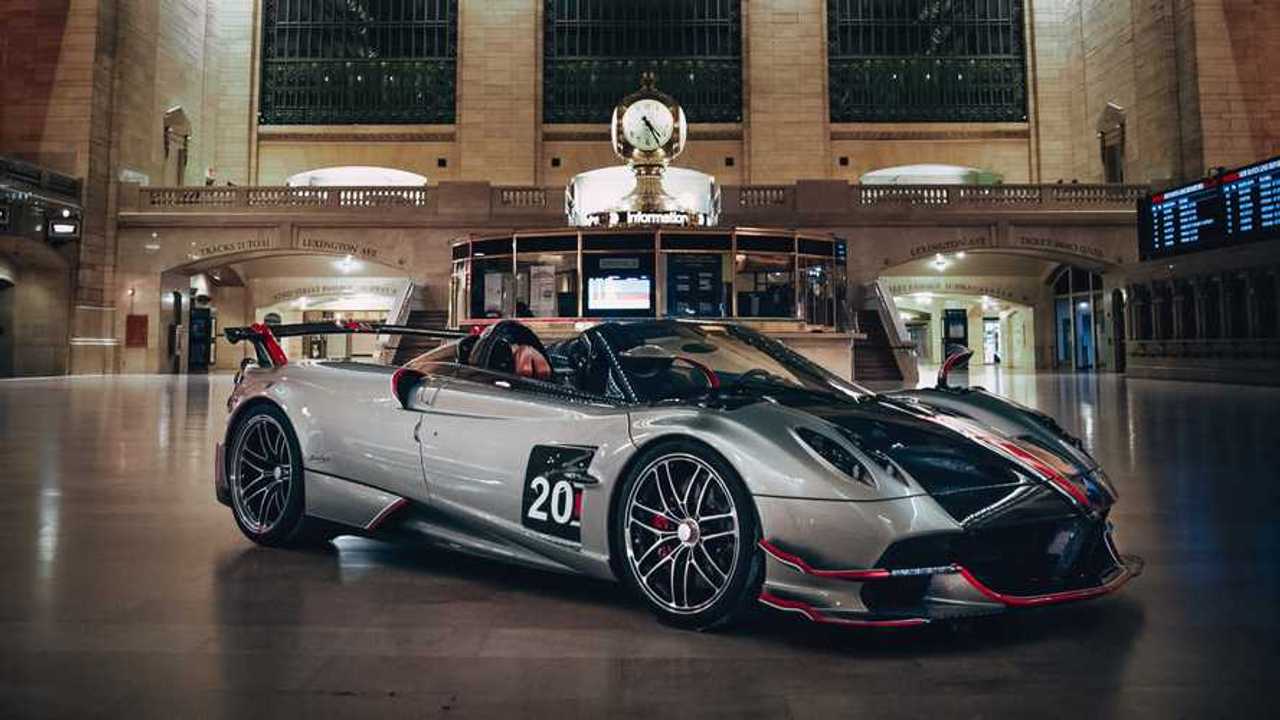 New Yorkers have some automotive eye candy to peruse during their daily travels.

Pagani builds some absolutely incredible automobiles. Compared to Ferrari or Lamborghini – two Italian firms that built reputations over the course of decades, Pagani is still a young player in the supercar scene with barely 20 years under its belt. There’s no question its reputation is just as stout as the aforementioned automakers, however, and proof of that can be seen right now at New York City’s Grand Central Terminal.

Pagani's past and present:

750,000 people pass through Grand Central Terminal every day, and from 5-8 November they will be able to see six of the company's creations. Five of them are of the Zonda variety – specifically the Zonda R, Zonda F, Zonda Cinque, Zonda HP Barchetta, and the very first Zonda production car that introduced Pagani to the world at the 1999 Geneva Motor Show. The sixth is the Huayra Roadster BC, the company’s most recent offering that debuted earlier this year during Monterey Car Week.

In addition to the cars, visitors to the display can learn about Pagani’s history. Called “Pagani, The Story of a Dream,” the history of company founder Horacio Pagani is outlined, including his move from Argentina to Italy in 1982 and his stint with Lamborghini which included work on the Countach. He eventually started his own design company in a building basically right next door to Lamborghini, working with composite materials. That led to the first Pagani supercar, and well, the rest is history.

Pagani to use updated AMG twin-turbo V12 engine until 2026

“Grand Central Terminal, a globally recognised transportation hub with timeless design and beauty, is an iconic location where many immigrants arrived and began their American dream. As there are significant parallels between their journeys and mine, I am honoured to tell my story here,” said Horacio Pagani. “I hope New York City residents and visitors passing through will enjoy seeing my work and learning about how the commitment to sacrifice, hard work, and passion can help anyone realise their own dream.”

If you happen to be in New York, the Pagani display at Grand Central Terminal runs through November 8.

Discover the story of the life and career of Horacio Pagani, the man who turned Supercars into Hypercars
See the Pagani Zonda Collection – five of the most remarkable Italian Hypercars ever made - and the brand new Pagani Huayra Roadster BC
Witness these automotive landmarks within the grandeur of Vanderbilt Hall in Grand Central Terminal
Display open to the public November 5-8, 2019 from 10AM-7PM each day

New York, November 5, 2019. In the city where dreams come true, Horacio Pagani – Founder and Chief Designer of Pagani Automobili – recounted the story of the dream he had as a little boy in Argentina: to create the most impeccably designed supercars ever built.

Early in his life Horacio became a firm believer in Leonardo DaVinci’s principle that Art and Science can go hand-in-hand. This belief led him on a path to the Motor Valley in Modena, Italy and to a philosophy that he and his team still follow today.

“Pagani. The Story of a Dream” is a remarkable opportunity for North American car enthusiasts, especially New York inhabitants and the 750,000 people who pass through the city’s Grand Central Terminal every day, to see some of the rarest hypercars in the world. The collection will be open to the public November 5-8 from 10AM-7PM.

“Grand Central Terminal, a globally recognized transportation hub with timeless design and beauty, is an iconic location where many immigrants arrived and began their American Dream. As there are significant parallels between their journeys and mine, I am honored to tell my story here,” said Horacio Pagani. “I hope New York City residents and visitors passing through will enjoy seeing my work and learning about how the commitment to sacrifice, hard work and passion can help anyone realize their own dream.”

“Pagani. The Story of a Dream” is presented by tire manufacturer Pirelli, a partner of Pagani Automobili for more than a decade. The relationship between Pagani and Pirelli began in 2008 and has since shared a number of important milestones: from the first record set with the Zonda R at the Nürburgring in 2010 on Pirelli P Zero tires, to the development of the Formula One modeling process of the P Zero Trofeo R tires for the new Pagani Huayra Roadster BC.

In order to achieve the best performance and the highest standard of safety, Pirelli conceives and designs each tire with a specific car in mind. This Perfect Fit strategy is well aligned with Pagani, which tailors each car to a specific client.

“We are very proud to be a partner of Pagani in this unique event, in one of the most iconic spots in the world,” said Marco Crola, Chairman and Chief Executive Officer, Pirelli North America, Inc. “Working with Pagani is a real pleasure for us. Every day, with his dream cars, Horacio presents us with highly advanced challenges and pushes us to achieve ever higher technological goals. So, I’d like to thank Horacio for not only having us as the presenting sponsor for this incredible event, but also challenging us to reach the peak every day.”

On display in the Grand Central Terminal is the very first chassis ever released by Pagani Automobili: Zonda 001, which earlier this year was meticulously reconstructed using original materials as part of Pagani’s Rinascimento Program. Additionally, the four other cars of the Pagani Zonda Collection, which have been touring the world for the Zonda’s 20th anniversary celebration, are also gracing Grand Central’s Vanderbilt Hall.

Rounding out the exhibition is the Huayra Roadster BC – the latest creation from Pagani, which was officially unveiled during this year’s Monterey Car Week. This model is the culmination of many years leading the field in lightweight composite materials to create a Roadster that actually weighs less than its coupe counterpart. With individual cars valued as high as $18 million, this six car exhibit offers auto enthusiasts a rare opportunity to see these unique works of art.

The Pagani Collection includes the following:

Zonda 001
The very first Pagani production car, it was unveiled at the 1999 Geneva Auto Show and recently underwent a complete rebuild to bring it back to concours condition. It features the now classic Pagani carbon fiber monocoque and 450hp Mercedes-Benz AMG engine.

Zonda F
Dedicated to Horacio Pagani’s mentor, Juan Manuel Fangio, the car was built to create a lighter, safer hypercar, shedding 110 lb. As the lightest hypercar in its class, the Zonda F set a Nürburgring lap record in 2007 with its 602hp AMG V12 engine.

Zonda R
Developed in 2006 as the ultimate track car, only ten examples were built after the car was unveiled in 2009. Using cutting edge F1 and aerospace technology, the car set another Nürburgring record in 2010 and held the Top Gear track record for several years thanks in part to its 750hp dry-sump AMG V12 engine.

Zonda Cinque
Only five examples of perhaps the most beloved Pagani Zonda road car were ever built, combining elements of the Zonda F and R to originally satisfy a special request from a Hong Kong customer. It was the first road car to use a special ultra-reinforced, Pagani-developed carbo-titanium chassis, which was the lightest, strongest and most aerodynamic body ever produced by the factory.

Zonda HP Barchetta
Designed by and for Horacio Pagani himself as the first of a series of three cars, the more refined model was the work of the special Uno-di-Uno division, which builds tailor-made cars. This car, a tribute to the Barchetta racing cars of the 1950s, has no roof and offers a different driving experience to other Pagani cars. It also adopted iconic elements from other models, such as the Cinque’s roof scoop and high- strength chassis. It is a true work of art.