Kia has revealed a spectacular concept car on display starting today until 10 November at the 2019 China International Import Expo (CIIE) held in Shanghai. It’s called the Futuron and takes the shape of a coupe-SUV with a sleek two-door body and giant wheels as you’d come to expect from a showcar. Its name represents a portmanteau of “future” and “on” to suggest the concept’s styling previews electric Kias of the future and offers a high level of connectivity.

Billed as being a sports car sitting on an SUV platform, the Futuron is entirely electric and has been engineered with an all-wheel-drive system, although Kia doesn’t go into any specific details about the hardware. We do know the concept car is 4850 millimetres long with a massive 3000-mm wheelbase and just 1550-mm tall. The automaker’s corporate tiger-nose grille has been reinterpreted as it’s now wide enough to meet the headlights and it also lights up.

Much like the Imagine by Kia Concept unveiled back in March at the 2019 Geneva Motor Show, the Futuron is a window into Kia’s electric future as the zero-emissions models will adapt design cues from the two showcars. Shaped like a diamond, the panoramic glasshouse takes styling traits from UFOs and flying saucers, while the LIDAR sensors built into the glasshouse grant the vehicle with Level 4 autonomous driving features.

The high-riding coupe’s cabin is just as special as the exterior thanks to reclining front seats that lean back once the steering wheel retracts when the autonomous driving system is activated. In the reclined position, Kia says people sitting in the front are just as comfortable as first-class airline passengers, while the Dragon Skin motif visible inside and out is a nod to Chinese culture.

See other concepts from Kia: 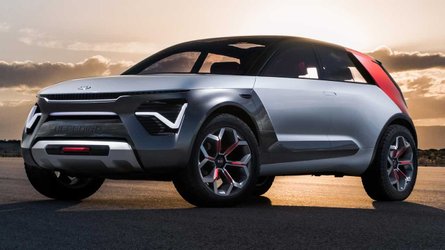 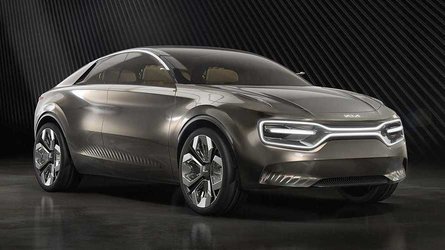 Kia Imagine EV will reach production looking like the concept

The Futuron is too extravagant to reach the assembly line anytime soon, but expect some of the design cues to trickle down to electric Kia models sooner or later.