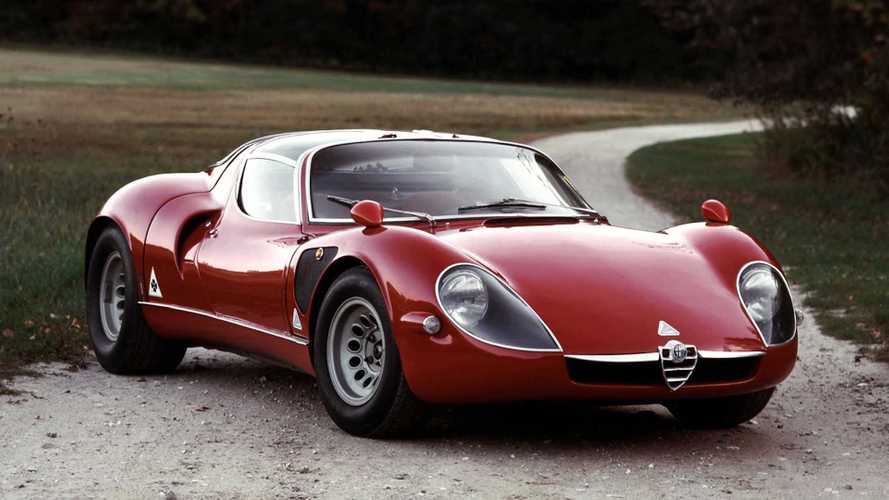 The first supercar of the modern era, and one of the most beautiful designs of all time.

At some point in the mid 1960s, Alfa Romeo decided to pack all the might of their glorious (although eventually unsuccessful) new racer, the 1966 Alfa Romeo Tipo 33, into a car that should be street legal and relatively comfortable to drive in the autostrada. The result was the 1967 Alfa Romeo 33 Stradale, a gorgeous two seater that is regarded today as the first modern supercars and one of the most beautiful designs of all time.

Race Car For The Road

Italians use the word stradale to signify a 'street legal' car, and technically this was the case for the 33 Stradale. But you wouldn’t guess it at first sight. Its powerful bodywork, designed by Franco Scaglione, looked as ready to race as the car it was based on. However, looking it up close there are details that reveal the 33 Stradale's more civilised purpose.

Among its many distinctions, the 33 Stradale was the first production car to use butterfly doors, which opened upwards with its hinges located on the A Pillar. From the beltline upwards the doors were all glass and curved into the roof of the vehicle creating a T-Top of sorts, very much like its contemporary GT40, but with the top panels being all glass.

The Alfa Romeo 33 Stradale is smaller than what its stylised silhouette suggest, with a total length of 3,970 mm, a wheelbase of 2,350 mm, and an impossibly low total height of 991 mm. Its cabin was sumptuous for a 1967 sports car, with leather everywhere and polished metal handles and switchgear. The bolstered seats are very low as Alfa Romeo didn't want the open portion of the doors hitting the passengers head as they closed down.

Behind those seats, sits a 2.0-litre displacement V8 producing 227 bhp and 152 pound-feet of torque send to the rear wheels through a six-speed transaxle by Colotti.

The 18 units produced differ from one another, not because yearly updates, but because as their bodies were handmade by Carrozzeria Marazzi, decisions were made in order to improve the car and its tedious production process. This is the reason why we can find cars with either one of two windscreen wipers, or with different mountings for the windscreen. The first two prototypes built had a dual headlight configuration that wasn't compliant with the light height requirements for street legal cars, for which Scaglione had to redo the lights design with single headlight configuration that while looking great didn't look as good as the first two cars.

The most sharp-eyed among you have probably realised the great influence that the 33 Stradale had on the design of the Alfa Romeo 4C. However, the realities of production of the 21st century automobile as well as today's safety regulations and requirements make designs such as the Alfa Romeo 33 Stradale completely impossible.