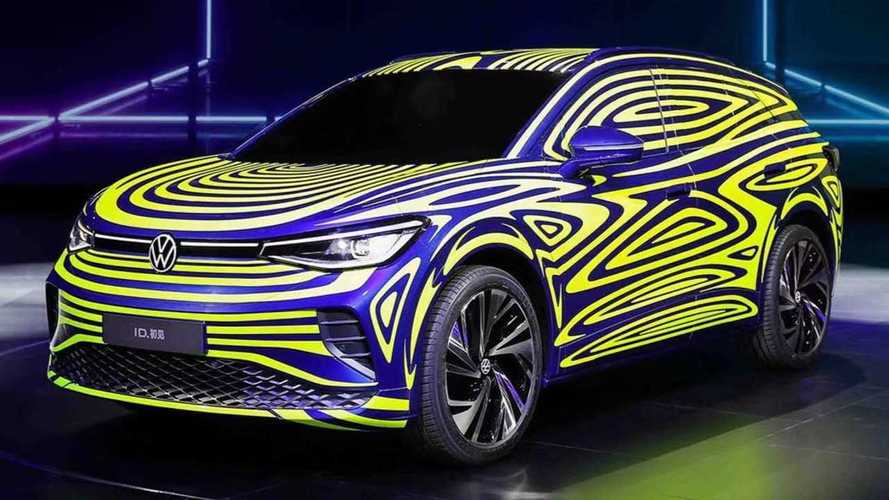 The Volkswagen Group will finally kick off the production of its first MEB-based electric vehicle on Monday when the first ID.3 is going to roll off the assembly line at the Zwickau factory. The zero-emissions compact hatchback is just the tip of the iceberg as a lot more EVs are on their way, including the ID.4 (name not confirmed yet) first previewed in 2017 with the I.D. Crozz concept that was updated just a few months later.

Promising Golf GTI-like handling – at least in concept form – the electric crossover will morph into a vehicle you’ll actually be able to buy in 2020. Following an official reveal allegedly scheduled for next spring, the ID.4 will be at  dealerships in the United States in roughly about a year from now. Meanwhile, VW is teasing the model in China where it will be locally produced from late 2020. The aforementioned ID.3 will also be built in the People’s Republic through the SAIC VW joint venture. There is no confirmation yet if the ID.4 will be available in Europe - probably not.

The ID.4 shown here is likely a pre-production prototype similar – if not identical – to the one VW had on display back in September at the Frankfurt Motor Show where the crossover was enclosed in a glass box with very little lighting as a way to hide the design cues. We can now see it in full, albeit the funky body wrap does a good job at masking the finer details. The blacked-out windscreen and the camo on the greenhouse suggest VW is not ready to reveal the vehicle’s interior yet.

The ID.3 and ID.4 are part of a greater electrification plan VW is working on for China where it will launch 10 plug-in hybrids and EVs by late 2020 based on existing products. By 2023, there are going to be 10 EVs in China based on the MEB platform. In addition to the EV onslaught, new conventionally powered models will be launched locally, specifically the Tacqua compact crossover and the Viloran large MPV to follow 14 other models that have been launched in China since early 2018.

As a final note, it is worth mentioning VW is not done with unveiling I.D. concepts as a new one will be introduced on 19 November.

The Volkswagen brand is boosting its e-mobility offensive in China. Next year, about 300,000 electrified models are already to be handed over to customers. The figure will then reach about one million by 2025. By 2023, the Volkswagen brand will offer 10 models based on the MEB modular electric drive toolkit on the Chinese market. In Guangzhou, the SUV study ID.Next, already on show at the IAA, gave a glimpse of the first model in the ID. family for China. Production of this model is to start at the end of 2020. The ID.3 will then be produced by SAIC VOLKSWAGEN at the new plant in Anting. This way, Volkswagen is also making its corporate goal clear in China: the brand is on its way to mobility with a net neutral carbon balance.

Dr. Stephan Wöllenstein, Member of the Board of Management of the Volkswagen Brand, and CEO of Volkswagen Group China and Volkswagen Passenger Cars in China, said during the New Brand Design presentation in Guangzhou: “We have given our brand a new look, a new character, a new corporate goal focusing fully on decarbonization and new cars. Volkswagen will continue to bring fascinating models onto the market – including cars with high-efficiency combustion engines. However, the ID.Next and ID.301 show that we are on the way to mobility with a neutral carbon balance with battery electric vehicles.

In order to achieve the ambitious targets, the Volkswagen brand will already be launching 10 electrified versions – plug-in hybrids and all-electric vehicles – of existing models on the Chinese market up to the production of the first ID. in China at the end of 2020.

The Volkswagen model offensive also includes high-efficiency internal combustion engines. Since the beginning of 2018, the Volkswagen brand has introduced a total of 14 new models including five new SUVs in China. In Guangzhou, the brand presented the compact SUV TACQUA, which is to be produced by FAW Volkswagen. A new model in the SAIC VOLKSWAGEN portfolio is the large MPV Viloran.