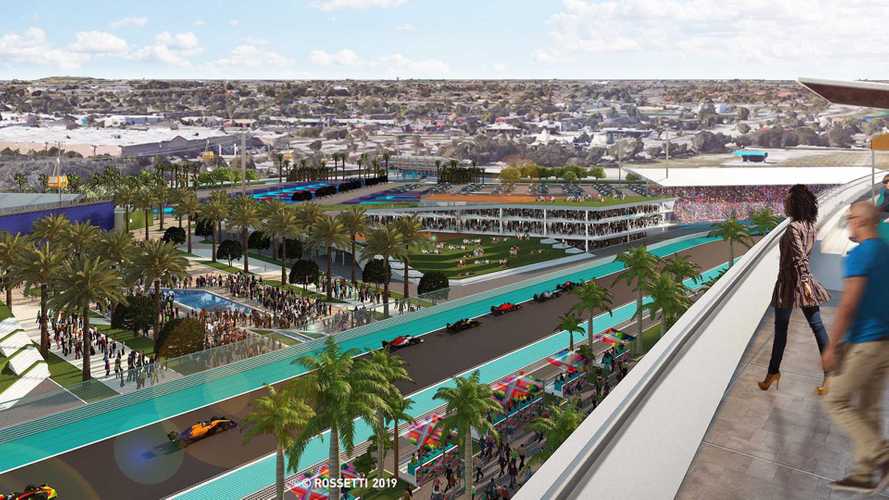 The proposed Miami Grand Prix at the Hard Rock Stadium faced major local opposition during a public meeting of the board of county commissioners at Miami-Dade’s City Hall on Tuesday, and will now require a further public hearing in December if it is to happen as planned in 2021.

The new F1 track is proposed to be built using both public roads and the parking area for the stadium, home of the Miami Dolphins NFL team, which is located in the city of Miami Gardens about 15 miles north of Miami’s center.

During a motion entitled “Establishing county policy regarding motor vehicle racing” the opposition to the event at the stadium argued that a large-scale public hearing was required to discuss the full impacts of air and noise pollution, as well as disruption of road closures during the event.

Two votes were passed by commissioners, both aimed at derailing the process of bringing F1 to the stadium. The first was related to requirement of approval after a public hearing; the second was related to public road closures requiring county commissioner-level approval.

The opposition group against the event was led by former county commissioner Betty T Ferguson. She argued that the county’s studies had shown “deadly effects” via air and noise pollution.

“It’s Formula 1 racing in a bedroom community,” said Ferguson. “The majority of residents in Miami Gardens do not want to see F1 racing at Hard Rock Stadium; the Miami Gardens city council voted to oppose Formula 1.

“We have seen too often deep pockets paint rosy pictures and have their way, only to the embarrassment of the county at a later date. Don’t allow F1 promoters to come in and roll over us over, like we’re not even humans.

“They can produce all kinds of phony statements about how they can mitigate the deadly effects, but we can never erase deadly health damage, and possibly permanent hearing loss, especially to children. Even the county’s own study verifies the deadly effects.

“No permission for road closure or special events should be given to the Dolphins without full public hearing.”

Miami Gardens Mayor Oliver Gilbert also spoke out against the race taking place: “We understand we’re in the business of tourism, but this has to be a good place to live and not just visit.

“F1 may bring people, but the people live here matter and sometimes we forget that. There’s people living around the corner, there are schools there. I’m not against events at the stadium, but not all events are the same. We’re not in support of Formula 1. It’s not a place to dump events that are toxic to people.”

Speaking on behalf of the stadium’s owners, Marcus Bach-Armas, senior director for legal and government affairs for the Miami Dolphins, lobbied that the commission had previously voted 13-0 in favor of bringing F1 to Miami, and they wanted the event to stay in the county after plans for the downtown street circuit fell through.

He also made it clear that the county had also authorized racing to take place at the venue: “We are zoned for motor vehicle racing because a couple of years ago we resolved a lawsuit with the county commission and the city council, there were public hearings and public votes and the resolution of those three years of discussions. And you voted to allow motor vehicle racing at the stadium district as a matter of right. Three years later, we’re rehashing that conversation.”

He said the event would be “an economic juggernaut for this area” and argued that the stadium was a “regional asset that’s balanced with residents, and we’ve worked together with them to sort through issues before. I don’t understand why the response now is simply ‘no’.

“The easy thing is to say ‘no’, but we should work through this so it benefits the community. We’ve always done that, and we’re looking to have the opportunity to do that. It would be embarrassing to give up this opportunity.”

The previous Miami Grand Prix plan – to run a street race around the Bayfront Park, Biscayne Boulevard and Port Miami areas – was hampered by vehement public opposition to the disruption that the event would cause to residents, coupled with the loss of the land around the American Airlines basketball arena. However, advocates of running the race at the Hard Rock Stadium stated that it was in fact the operation, construction, development and security issues at the port that ended the plan, rather than the residents’ challenge that killed the original plan.

Formula 1’s commercial managing director Sean Bratches and two-time F1 world champion Emerson Fittipaldi also lobbied in favour of the event during the City Hall meeting. Fittipaldi mentioned the fact that he only came to Miami to race for Ralph Sanchez’s team in the Miami Grand Prix IMSA race, before making his home there.

Towards the close of the meeting, Miami-Dade’s Mayor Carlos Gimenez – who has been a supporter of the event – concluded: “This F1 race would be a terrific event. Hopefully we can work this out with the community it affects.”