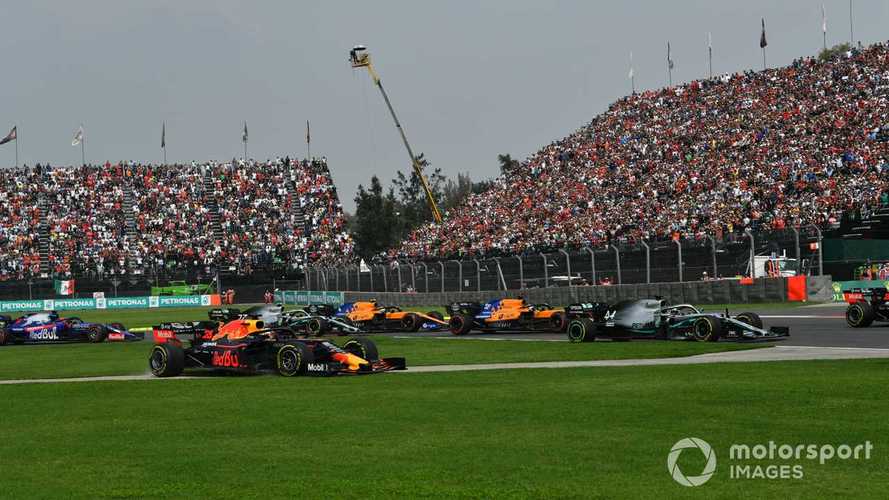 Mercedes' Lewis Hamilton and Ferrari's Sebastian Vettel race differently against Red Bull driver Max Verstappen in Formula 1, with Hamilton saying that crashes are likely if you don’t “leave extra space” for the Dutchman.

Hamilton and Verstappen came together on the opening lap of the Mexican Grand Prix, with Hamilton oversteering at Turn 2 in response to being forced wide by Verstappen and edging both drivers off the track and onto the grass.

Five laps in, Verstappen then made a lunge into the stadium section on Hamilton’s teammate Valtteri Bottas, but was hit in the right rear by Bottas after the latter tried to cut back onto the racing line, the contact yielding a puncture that derailed Verstappen's race.

Despite Verstappen not appearing to be at fault for either of those incidents, the Red Bull man's driving was brought up in the post race press conference when Hamilton, Sebastian Vettel and Bottas were quizzed on whether they approach racing Verstappen differently.

“Yeah,” Hamilton replied. “I think every driver is slightly different.

“Some are smarter; some are like very smart, aggressive and some are silly with it.

“And so, through those experiences of racing with people, you give some more space and [with] others you don’t have to. They’re quite respectful.

“But yeah, Max, it’s very likely you’re going to come together with Max if you don’t give him extra space, so most of the time you do.

“But as I said, in my experience, I didn’t have a lot of space to give him extra space [in the incident at Turn 2]. But I don’t think it was intentional or anything like that.

“It was just, he’s a magnet for those kind of things but yeah, nonetheless, I managed to keep the car together and in a straight line, fortunately.”

When likewise asked whether he treated Verstappen differently when racing and whether he felt Verstappen was the most aggressive driver out there, Vettel responded in the affirmative on both counts.

Bottas, describing the incident in the stadium, said that Verstappen had “earned his own puncture”.

“For me, just out of nowhere he appeared on the inside into Turn 13 and, you know, I couldn't disappear from there,” added Bottas.

“He just dived in and we touched. He got a puncture from that, so… yeah, I couldn’t really avoid him, so I think he earned his own puncture, definitely.

“But, I don’t know, every driver is obviously different. Some are more aggressive, some are less.

“I haven’t raced very closely for some time with all of them, so I can’t say in detail for all the drivers.”