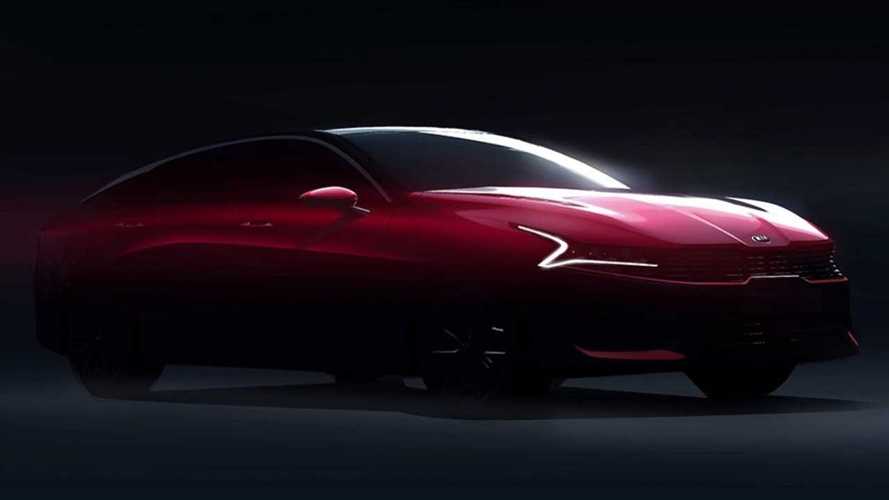 Kia is actually teasing the K5 for South Korea, but the international Optima should be virtually identical.

Say what you will about Kia designs of the 90s and 00s, but there’s no denying the company has upped its game in recent years with cars like the sporty Stinger, the funky Soul, and the Telluride family hauler. There’s more to come as the company has kicked off the teaser campaign for the new Optima by releasing hugely promising images of the K5 destined for domestic market South Korea.

As you can see in the adjacent shadowy pics, it looks nothing like the Optima on sale today and you’d be tempted to say it’s an entirely different car positioned above the midsize saloon. Have no doubt – it is the K5. We spotted the car several months ago, but the heavy camouflage did a good job of masking the revamped design.

From the gently sloped roofline to the wide “tiger nose” grille, the new Optima aims to be a far more stylish car than the current model, which isn’t even that old considering the fourth generation has only been around for approximately four years. The headlights have an interesting shape as they practically merge with the grille and feature LED daytime running lights shaped like a “Z” in the same vein as on the bigger Cadenza (K7 in South Korea).

The side profile shows a prominent curved character line right in the middle of the doors and has a clean look thanks to the absence of handles. However, keep in mind this is a rendering part of the teaser campaign to make the car look nicer than it actually is, but the real deal has been spotted with conventional door handles.

Other noticeable changes are the door mirror caps positioned lower on the front doors and a front quarter glass you won’t find on the current Optima saloon. To give the sensation of a coupe silhouette, Kia’s designers have applied a thick chrome / metallic bar at the base of the A-pillar that continues above the greenhouse before gradually coming down at the rear pillar. The current car also has it, but its replacement will extend the piece of trim on the boot lid at the base of the rear window.

The full-width taillights have an interrupted LED pattern, while the slightly arched boot lid appears to feature a chrome bar that goes from one corner to the other to further accentuate the Optima’s generous width. You can’t see them here, but the dual exhaust tips were completely visible on the aforementioned prototypes.

Kia has also dropped a teaser image of the interior, revealing the fully digital instrument cluster joined on the right side by an extra-wide infotainment screen. There seem to be fewer buttons on the centre console, while the large gear lever of today’s car has been replaced by a tiny rotary shifter. Overall, the dashboard has a much cleaner look we’re eager to see in real life.

The adjacent official renderings were actually published by Hyundai South Korea, and although the Facebook post doesn’t say when the reveal is scheduled to take place, it’s likely not that far away. All things considered, it appears the next Optima / K5 will be just as visually appealing as the mechanically related Sonata / i40.