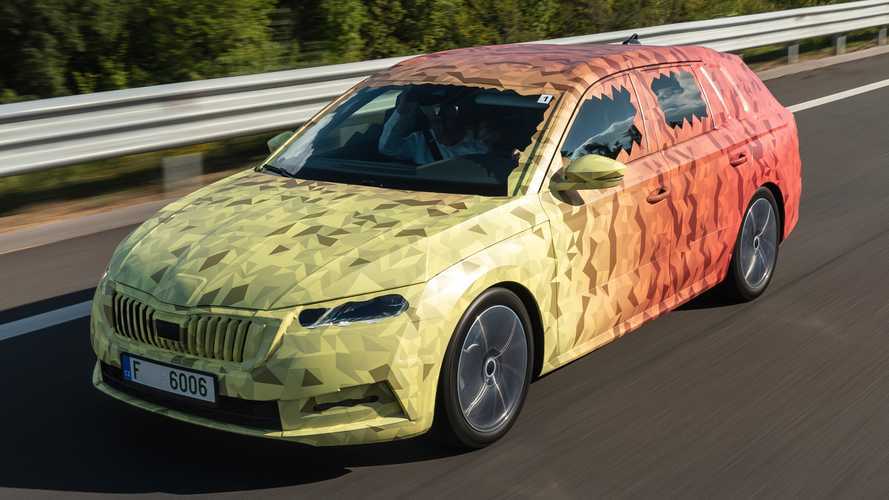 It's even bigger than the outgoing model and has just about the same oily bits as the VW Golf 8.

Ahead of its November 11 premiere, the Octavia is making the headlines once again courtesy of a generous press release providing a significant amount of info about the juicy technical specifications. The surprisingly long document released today by Skoda could easily pass off as the press release the Czech brand will publish on the car’s debut set to take place in Prague. Without further ado, here’s what you need to know about the Octavia 4.

The Octavia has always been at the upper end of the compact segment in terms of size, and it’ll be the same story with the next generation. Take for example the hatchback, which will grow furthermore and measure 4689 mm long, 1829 mm wide, representing an increase of 19 mm and 15 mm, respectively. The estate teased here under a colourful body wrap will be 22 mm longer (at 4689 mm) and 15 mm wider (at 1829 mm) or exactly the same as the hatchback. Both body styles will carry over the wheelbase from the outgoing model, at 2686 mm.

Not only is it even bigger than before, but the new Octavia is also sleeker as the drag coefficient has dropped to 0.24 for the hatch and to 0.26 for the long-roof model. It goes without saying the more aerodynamic shape will pay dividends in terms of fuel consumption and CO2 emissions. Wheels as large as 19 inches are going to be available, along with redesigned shallow roof rails enhancing the vehicle’s increased footprint.

Much like the Volkswagen Golf 8, the Octavia will be optionally offered with matrix full-LED headlights that debuted on a Skoda earlier this year with the Superb facelift. Another novelty for the company’s core model will be the full-LED taillights with those swanky dynamic turn signals the Golf has had for a while.

Skoda has not released any teaser images of the interior, but we do know from spy shots there are going to be some major changes. We do know straight from the Mladá Boleslav automaker there’s now even more room than before, with people sitting in the back enjoying 78 mm of kneeroom. The Octavia already had the best-in-class cargo capacity, and it will remain this way as the new one will offer 600 litres for the hatch and a cavernous 640 litres for the estate.

The two-spoke steering wheel seen on prototypes is mentioned in the press release, as is the 10-inch fully digital instrument cluster accompanied by a touchscreen of the same size for the infotainment system. As it is the case with its mechanically related sibling from Wolfsburg, the fourth-gen Octavia will be offered with a head-up display – a first for Skoda. It’ll also have the Golf’s shift-by-wire tech for the DSG, along with an electric parking brake.

We also get to learn about the engines, which to the surprise of no one, are inherited from the Golf. The 108-bhp 1.0 TSI three-cylinder and the 148-bhp 1.5 TSI four-cylinder unit hooked up to the seven-speed DSG benefit from mild hybrid tech and can be had without electrification paired to a six-speed manual. In the case of the four-cylinder engine, it’s a new six-speed transmission enabling more torque delivery. The top-spec 2.0 TSI will be offered only with AWD and the seven-speed DSG.

Three cleaner-than-ever 2.0-litre TDI Evo diesel engines will be offered, with an output of 113 bhp, 148 hp, and 197 bhp. These can be had with that new six-speed manual, and excluding the less powerful one, with optional AWD.

There’s also going to be a plug-in hybrid Octavia iV (think Golf GTE) combining a 1.4 TSI petrol engine with an electric motor to offer a total output of 201 bhp for the base version and 242 bhp for the more powerful variant, with both featuring a six-speed DSG.

Skoda plans to sell an Octavia G-TEC in some markets with a 1.5 TSI producing 128 bhp and developed to run on compressed natural gas (CNG). You’ll be able to get one with either a six-speed manual or a seven-speed DSG. This eco-friendly variant will make use a 9-litre petrol fuel tank and three CNG tanks with a combined capacity of 17.7 kg.

Depending on whether you desire a sportier ride or more ground clearance, the Octavia 4 will be optionally offered with a sports suspension and a Rough Road package. With the former, the ride height will be lowered by 15 mm while with the latter it will be increased by the same amount. There’s also going to be Dynamic Chassis Control able to automatically adjust suspension and damping depending on the selected driving mode. DCC-equipped Octavias will be lowered by 10 mm, with the exception of the plug-in hybrids that are going to have the regular ground clearance.

It wouldn’t be a Skoda without some “Simply Clever” features, and the 2020 Octavia has them by the dozen. Already available on the Kodiaq and Superb, the sleep package is making its debut on the Octavia and bundles two bigger rear headrests and a blanket. Go for the estate and the net package is better than before, as is the new retractable load cover.

Other nifty features include a storage pocket below the boot’s cover, up to five USB-C sockets, 230-V rear socket, child safety locks for the rear doors that can be operated electronically, and storage pockets on the front seatbacks that can hold two smartphones. In addition, the storage compartment in the driver’s door where the umbrella is placed now also has enough room to store a hand brush.

Rounding off the list of Simply Clever goodies are the electrically unlockable tow bar, the funnel built into the lid of the windscreen washer tank, and a newly developed filler tube for AdBlue that can be filled up by using truck pump nozzles.

In less than two weeks from today, we’ll see both the hatchback and the estate, along with their electrified iV versions.