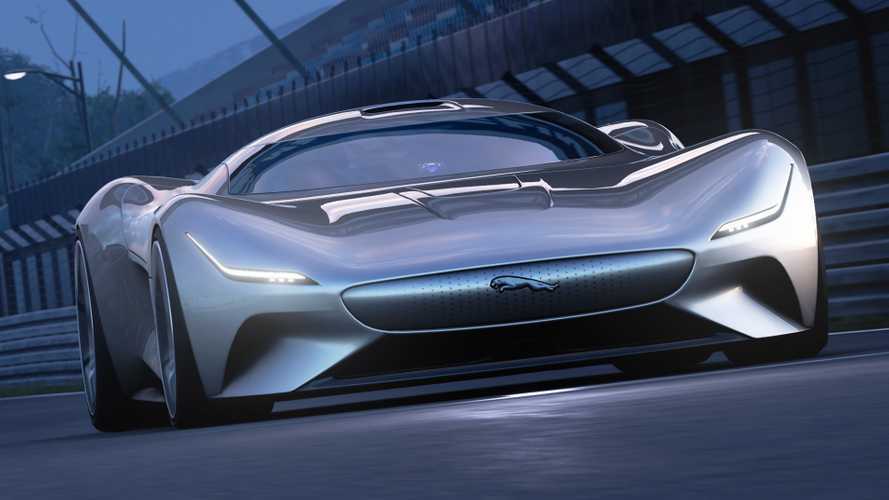 Coming to a Sony Playstation near you.

What happens if you stuff the designs of a Jaguar C-Type and D-Type, the company’s modern all-electric racers, the I-Type 4 and I-Pace eTrophy, and a Sony Playstation 4 in a blender? You get this, the Jaguar Vision Gran Turismo, a low-slung all-electric coupe destined for the racing game Gran Turismo Sport.

Set to arrive in the world of virtual racing at the end of November, the Jaguar Vision Gran Turismo is an almost impossibly low and slinky two-door that packs three electric motors that, together, generate an immense 1,005 bhp and 885 pound-feet of torque. In game, it’ll hit 62 miles per hour in less than two seconds and carry on past 200 mph. Along with that pace, Jaguar is promising gamers “perfectly balanced handling.” It tips the scales at 1,400 kilograms.

Unlike a lot of EVs, the Vision Gran Turismo will sound like a petrol-powered car. Specifically, Jaguar dug up new recordings of the D-Type Long Nose racer that finished on the podium of the 1957 24 Hours of Le Mans. That means a 3.8-litre six-cylinder will accompany this futuristic electric coupe.

But really, the performance is almost secondary to how the Vision Gran Turismo looks. The huge haunches remind us quite forcibly of Jaguar’s vintage racers, while the I-Pace-based eTrophy car gets its not-a-grille grille stretched horizontally between headlights that, charitably, are little more than slivers. The coup de grace is a pop-up canopy that allows the virtual driver to climb in and out.

Once ensconced in the minimalist cabin, the pilot sits on the right side of the car, trapped between the door and a tall strip that’s home to the shift lever. A race-like steering wheel sprouts from the dash with a small, transparent instrument cluster atop the column. The seat, if you want to call it that, looks like it’s carved right out of the body of the car and doesn’t look especially comfortable. Perhaps the most unusual addition is a holographic assistant called KITT-E. Now, yes, the assistant is pronounced “kitty,” but all the name makes us think of is Knight Rider. The holo assistant won’t appear in actual gameplay.

Look for more on the Jaguar Vision Gran Turismo when it arrives on the Sony Playstation at the end of November.