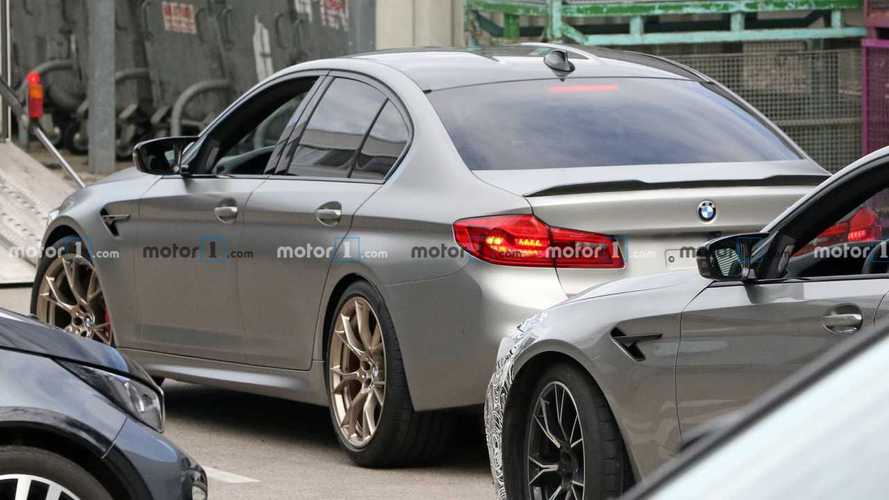 It’s difficult to miss the gold wheels and CS badge.

One year ago today, our spy photographers captured a lightly camouflaged BMW M5 believed to be the hotter CS variant. Today, new spy photos show what appears to be a production-ready version of the BMW M5 CS with the correct badge, rear spoiler, and wheels. But we have questions.

BMW is preparing to launch a refreshed version of not only its 5 Series saloon and estate but the hotter M5 version as well, which we spied for the first time last month. The BMW M5 CS in the new photos shows it’s based on the current BMW M5 offering and not the upcoming refresh, which is a bit strange. However, it could indicate that the updated M5 is still a year or more away from entering production, which would allow the BMW M5 CS to be a swan song for the high-performance saloon.

If the M5 CS is like other BMW CS variants, then customers should expect it to use the same twin-turbocharged 4.4-litre V8 making 617 bhp power the model. There are rumours of a more potent engine in the works, but it sounds like it’s still a few years away. The model should also sport a rear boot lid spoiler reminiscent of the ones seen on the M3 and M4 CS models. The design should receive minor tweaks for improved aerodynamics and cooling, and there should be extensive use of carbon fibre to help cut weight and increase the car’s overall performance.

We don’t know when BMW will unveil the M5 CS, but the wait shouldn’t be too long. If BMW is preparing to launch a refreshed 5 Series sometime next year with the updated M5 following, then the M5 CS should debut long before then. Auto show season is in full swing, giving the automaker plenty of opportunities to show off the new model.