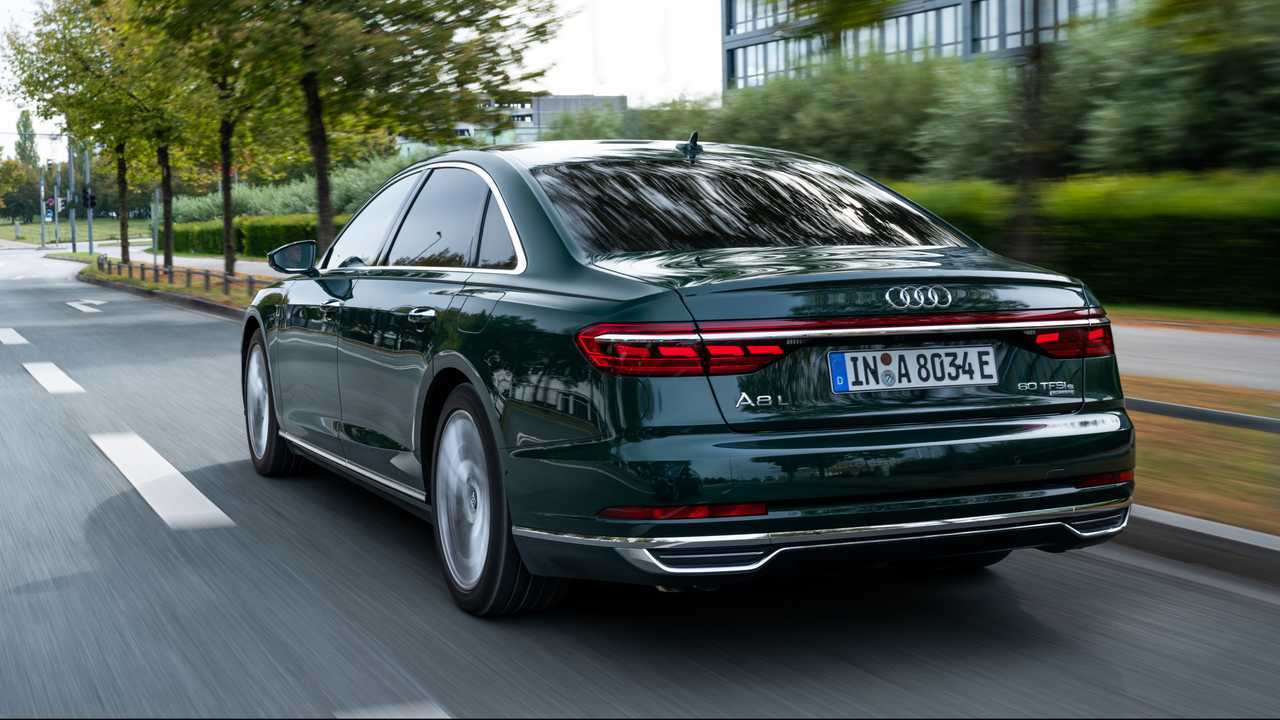 The plug-in car will manage around 28 miles on a single charge.

A plug-in hybrid version of Audi’s A8 luxury saloon will go on sale in the UK at the end of the year with first deliveries due early next year, the German car maker has confirmed.

More on the Audi A8:

Audi A8 gets predictive suspension tech for silky smooth ride

The long-wheelbase A8 L 60 TFSI e quattro will line up alongside plug-in versions of the A7 and Q5, which went on sale last month, and combines a 3-litre V6 turbocharged petrol engine with an electric motor.

In total, the dual powertrain produces 443 bhp, allowing the 5.3-metre-long, four-wheel-drive Audi to sprint from 0-62 mph in just under five seconds. As is so often the case with Audis - and indeed so many German cars - the top speed is electronically limited to 155 mph.

Less conventional, though, is the 14.1 kWh lithium-ion battery pack, which allows the car to travel for 28.6 miles on electric power alone, according to the new WLTP emissions and economy test. The e quattro will also manage speeds of up to 83 mph on electric power, while official fuel economy is 113 mpg.

This consumption is aided by various energy management systems, which allow the car to run in the most economical way possible. Using navigation data and the distance to the car in front, the Predictive Efficiency Assist system can tune its use of the electric and petrol motors accordingly, using electrical power when possible but using the petrol engine at the most efficient moments.

Similarly, the regenerative braking system performs the braking actions at anything less than 3 g, with the brakes only employed for more vigorous stops. According to Audi, though, the motor will carry out 90 percent of “brake operations” in “everyday” driving.

The e quattro will also come with the myAudi app, which allows the driver to check the battery and range status, start the charging process, program the charge timer and view the charge and consumption statistics. The app can also control the pre-entry climate control that can activate the steering wheel, seat, mirror and front and rear window heaters as well as seat ventilation and the climate control system, setting the car up for a journey before it is unplugged from the charger.

“A luxury car is not only defined by the quality of its materials and finish – a sense of calm, comfort and serenity is also integral to the overall experience,” said Andrew Doyle, director of Audi UK. “Which is why, with its near-silent, emissions-free driving mode, the A8 TFSI e raises the bar even higher in terms of refinement, even by the exceptional standards already set by the more familiar versions. It is a highly appropriate new addition to the A8 model line which makes perfect sense whichever way you look at it.”

Full pricing and specifications for the new A8 L 60 TFSI e quattro are expected closer to the car going on sale later this year.