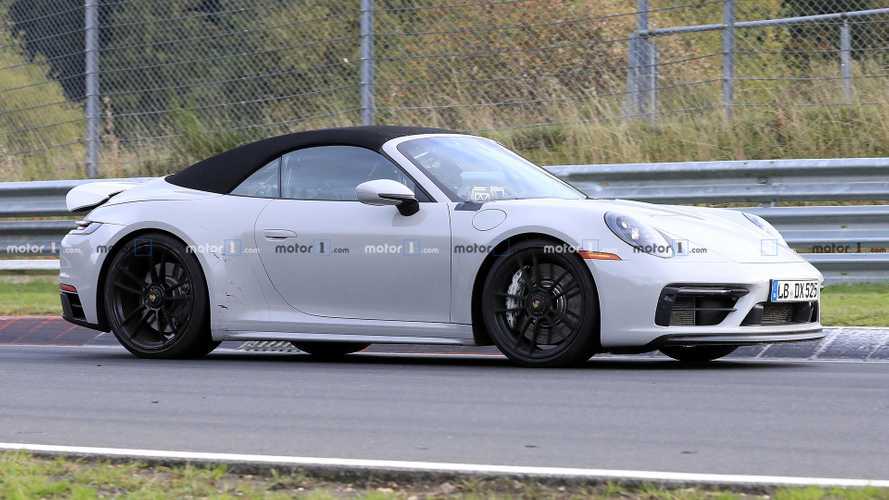 Other than opening the roof, it's hard to imagine a better look at the new GTS.

Looking for a Porsche 911 that's hotter than the Carrera S but a step below the Turbo, then the GTS is what you want. These spy shots catch the droptop variant of the mildly hot model during development. This one doesn't appear to be wearing much camouflage.

The GTS has a sporty front fascia that splits the inlets into three distinct sections, rather than the horizontal slats in the corners of the Carrera and Carrera S. At the back, there is a revised bumper with more vents around the outlets than on the other existing variants. The active rear spoiler carries over from the latest 911 Carrera range.

The GTS rides on centre-lock wheels, and there are massive brakes visible behind the spokes, especially in front. The front suspension appears lower than on other models, but this might only be because of how the car is cornering in the images.

Don't expect the GTS to look much different on the inside than other 911 variants. To denote the model's extra performance, there might be extra carbon fibre and Alcantara trim.

More views of the 911 Carrera GTS:

There are no official powertrain specs yet, but expect Porsche to boost the output from the 3.0-litre twin-turbo flat-six engine. The powerplant makes 443 bhp in the latest Carrera S, and the GTS should boost this figure even higher. Rumours put the number above 460 bhp.

These photos and other spy shots of practically undisguised development vehicles hint that Porsche doesn't mind people seeing this GTS on the road. The latest rumours suggest the variant would debut in the spring of 2020 and be on sale before the end of that year. With the Carrera S starting at £93,110, look for this version to cost even more.