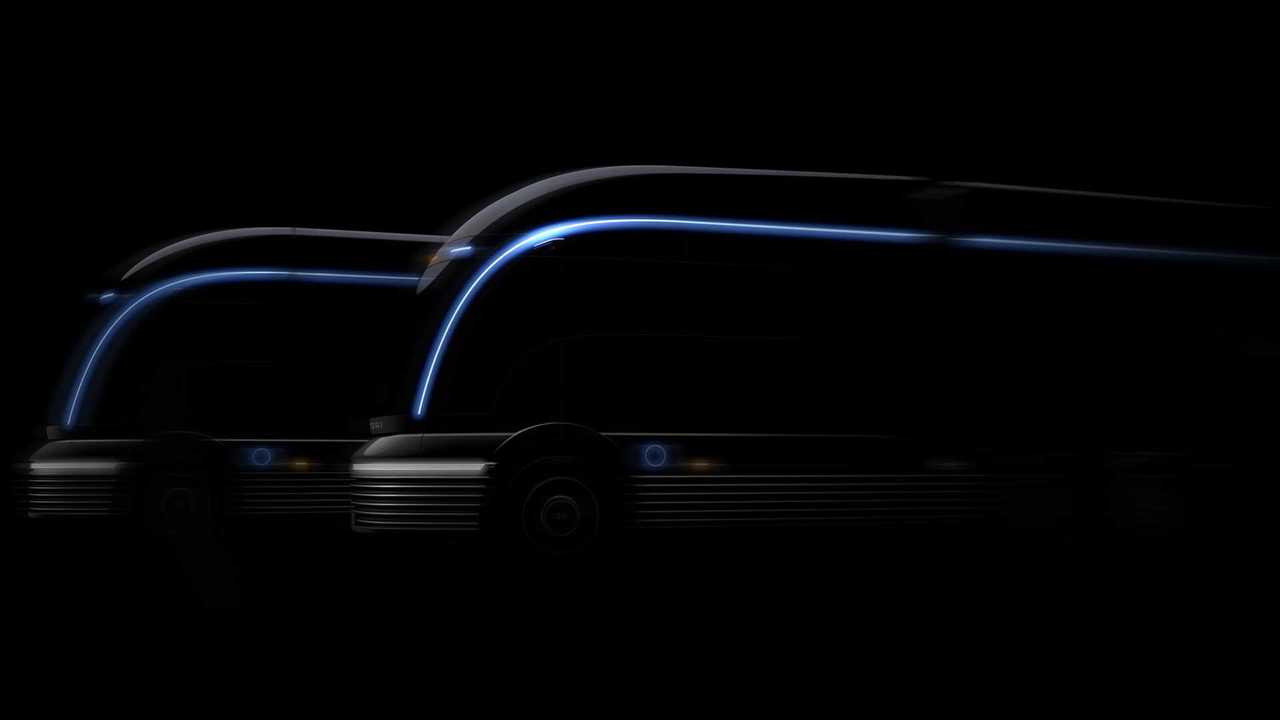 The concept's name originates from the Roman god of the seas.

It was only a few days ago when someone discovered Hyundai’s trademark filing for “Neptune” and now we know what’s it for – a conceptual HGV.  Going by the official name of HDC-6 Neptune, the zero-emissions electric truck feeding on hydrogen will receive its world debut on 29 October at the Georgia World Congress Center in Atlanta USA.

Meanwhile, Hyundai is teasing the eco-friendly HGV with a rendering of the Neptune, which it says has a design inspired by the streamliner railway train sets of the 1930s. Its arched top evokes the spirit of the wonderful Art Deco trains, while the bottom section might make you think of General Motors’ Futurliners. A blue LED strip extends from front to rear, and there’s an illuminated circle likely suggesting it’s the fuel cap.

Another rendering provided by Hyundai previews the concept’s interior where there are multiple screens and a single-spoke steering wheel incorporating the button for the hazard lights. The minimalist cabin appears to be devoid of any conventional buttons and knobs, and uses a pair of screens on the sides of the windscreen’s frame acting as the mirrors.

A giant head-up display is also noticeable, along with even more screens in the upper section of the windscreen frame showing a multitude of details about the fuel cell HGV as well as weather and phone info. A neat slider for the volume is positioned to the right of the driver, while a storage area that looks like a suitcase sits below.

Technical specifications are shrouded in mystery at this point, as are details about whether Hyundai actually plans to launch a production version. We do know the HDC-6 Neptune is complemented by what the company refers to as a “high-performance refrigerated concept trailer solution” that goes by the name of HT Nitro ThermoTech. The latter has been developed by Hyundai Translead, a San Diego-based company owned by Hyundai specialised in manufacturing dry and refrigerated van trailers, flatbeds, chassis, and dollies.

Supporting the company’s vision for a zero carbon emission fuel cell truck, Hyundai’s name for its concept HDC-6 NEPTUNE, recognizes the Roman god of the seas, Neptune, symbolizing the hydrogen powered natural elements of the sea – the largest potential source of hydrogen fuel on Earth. “We have cemented the fuel cell technology leadership positon in the passenger vehicle sector with the world’s first commercially produced fuel cell EV and the second generation fuel cell EV, the NEXO,” commented Edward Lee, Head of Commercial Vehicle Business Division at Hyundai Motor Company. “With the introduction of HDC-6 NEPTUNE, in addition to the road proven Xcient fuel cell truck, we expand our technology leadership into the commercial vehicle sector by unveiling our vision of how fuel cell electric trucks can resolve the environmental equations of widely used commercial vehicles and our commitment to create a decarbonized society.”

In addition to HDC-6 NEPTUNE’s unique construction, fuel cell system and advanced in-cab technology, its modern design draws inspiration from the streamliner railway trainsets of the 1930s with its Art Deco function-driven style. Similarly, the HDC-6 NEPTUNE design team found new ways to combine both form and function to create an entirely unique new solution within the commercial vehicle industry.

Hyundai’s commercial offerings include trucks from Class 2 to Class 8 and buses which are manufactured in three international plants and currently sold in 130 countries around the world since 1970s.