There's only one photo but it provides a great look at the new M3's rear end.

Evolve Automotive is a British firm that specialises in tuning BMWs, and a post on its Facebook page appears to provide an uncamouflaged glimpse of the new M3's rear. The model seems to be on the assembly line.

The camouflage in previous spy shots has concealed the significant size of the M3's prominent rear diffuser. There are two pair of exhausts with large, vertical strakes next to each set. Black trim runs along the lower edge of the bumper and turns upward to outline the diffuser.

There are very wide quarter panel wheel arches and a heavily sculpted rear, including a crease running below the taillights. The lamps have darker sections at the tops and tilt downward, which creates an aggressive look. A tiny spoiler sits on the edge of the boot.

While not visible here, a previous gallery of spy photos (above) provides a view of the cabin. There is a digital instrument cluster, and a large infotainment screen sits next to it.

The M3 will have a twin-turbo inline-six engine and be available with a six-speed manual. BMW M Division boss Markus Flasch hints that the output is above 510 bhp, at least for the top variant. Other versions will be available with all-wheel drive and a dual-clutch automatic.

Spy shots of the new BMW M3 under camouflage: 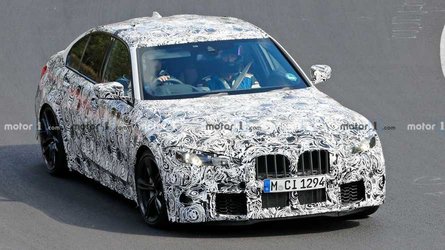 2021 BMW M3 spied showing some grille at the Nürburgring
⠀ 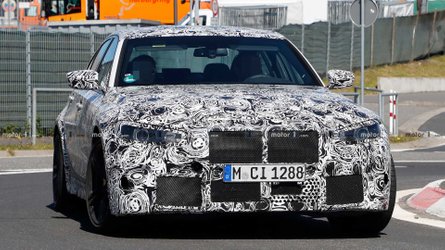 New BMW M3 prototypes spied going all out at the Nordschleife

While we expect the new M3 to go on sale in 2020, a debut date is still a mystery. The last major auto show in 2019 is in Los Angeles in late November. Like the recent M235i Gran Coupe, don't rule out BMW unveiling the M3 at an independent event rather than waiting until an international show.