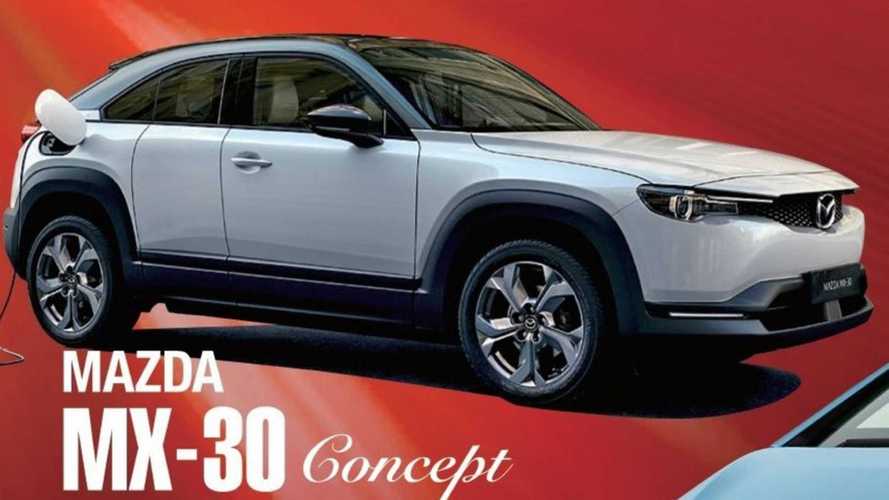 The official Tokyo Motor Show reveals some of the car’s secrets, such as the design and its name.

Last July, Motor1 reported that Autoguide discovered some trademarks from Mazda. Among them, there was the MX-30 name. Our colleagues even guessed it was a reference to the MX-3, but now we know what that was about. If it really was related to the late affordable coupé, we are ahead of a new example of good sports cars' names converted to crossovers and SUVs. In this case, not only that but also the first EV Mazda has created. The MX-30 is the electric crossover coupé the company is anticipating for the Tokyo Motor Show.

We have found that out with the help of Creative Trend. It published the official Tokyo Motor Show catalogue. We also have to thank El Carro Colombiano. It preserved the images of the Japanese website, now out in the air. There is no doubt this is the real thing.

New Mazda EV teaser reveals it will be a crossover
⠀

Mazda electric vehicle teaser takes a peek inside the cabin
⠀

Check the “front face” that “bears a friendly expression” and the “coupe-like cabin” that “achieves a lightweight look by adopting a unique door concept.” That is how Mazda itself described the new car in its press release.

Therefore, the MX-30 name is probably a reference to the former MX-3 coupé, as Motor1 guessed. Just not in the way we expected in more than one sense. It was also supposed to already be in production guise. Apparently, Mazda will present it just as a concept for now.

Calling it a concept will probably not change the fact that Mazda will sell it with the MX-30 name. And that the “unique door concept” will consist of suicide rear doors, probably with no B-pillar, an arrangement that is not new nor unique. Another EV, the BMW i3, already presents it. And it is not very practical for the families the MX-30 probably targets as clients.

We still have to confirm if it will really have a small battery pack of just 35.5 kWh, similar to the one presented by the E-TPV concept. And if it will really use a Wankel range extender. Apart from that, we already know the name, the design, and the solutions Mazda proposes for EVs. Hopefully, the price will be incredibly attractive.