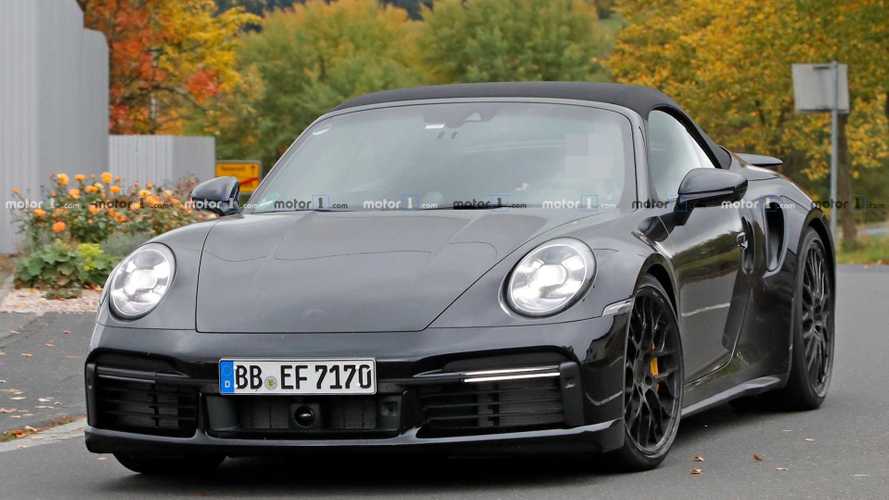 At this point, there’s little we don’t know about the styling of the upcoming 992-series Porsche 911 Turbo Coupe and Convertible, as Porsche’s been testing the two body styles of its high-horsepower 911 variant for months with barely any camouflage. Still, that doesn’t make us any less giddy to see these latest batch of images of a nearly naked 911 Turbo Convertible roaming – what appear to be – European streets.

Like previous 911 Turbos before it, the latest model features subtle styling differences to separate it from the typical 911 pack. Upfront, the Turbo benefits from a model-specific jaw with large vents to feed air to a pair of intercoolers.

The more noticeable changes pertain to the rear of the car, where the blistered rear quarter panel arches add large side vents fore of the rear wheels. Meanwhile, the rear end sports a ducktail rear spoiler. The rear bumper is also altered and includes Turbo-specific vents aft of the wheels. Likewise, the taped corners of the taillights may also hide small vents for exhausting hot air from the engine bay.

Motivation for the new Turbo will come courtesy of a twin-turbocharged flat-six engine, likely packing around 600 bhp in the standard model and about 650 bhp in the Turbo S. We believe the standard Turbo will sport dual oval exhaust tips (as seen here), while the Turbo S will include squarer-looking quad tips.

All of the engine's grunt is expected to get channelled to all four of the 911 Turbo's wheels courtesy of an eight-speed dual-clutch automatic transmission. Sadly, we aren’t banking on a manual transmission option in the upcoming Turbo. Regardless, we ought to know more in the upcoming months, as we expect the 911 Turbo Coupe and Convertible to make their formal debuts in the coming months before going on sale in 2020.