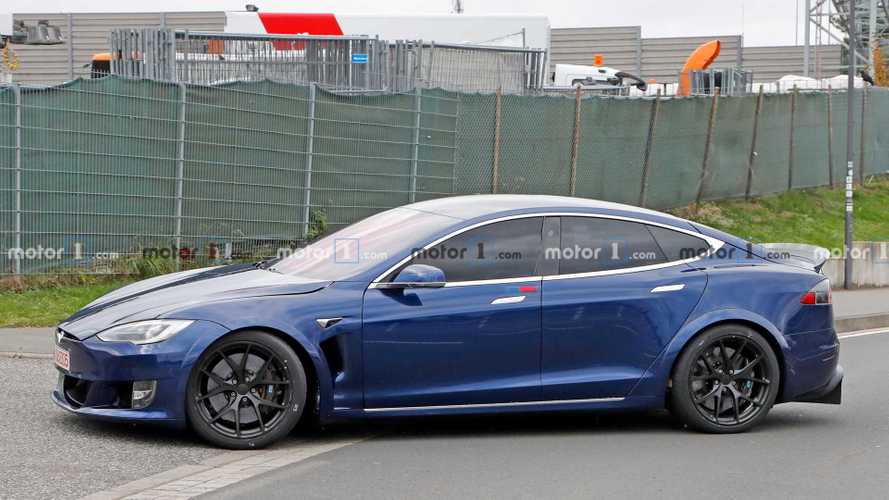 After Porsche set a new EV lap record at the Nurburgring with its Taycan electric vehicle, Tesla has been eager to one-up the German automaker. Days after Porsche’s announcement, modified Tesla Model S saloons were captured lapping the famous track. But Tesla’s time there was short, the company promising to return in October, which it has done. New spy photos show two modified Tesla Model S saloons at the track this month, and they look a little different, too.

The most noticeable difference is the air outlets on the front fender wings behind the wheels. This could help cool the brakes, help with aerodynamics, or provide another performance benefit as Tesla chases Porsche. The other difference is a massive rear diffuser tucked under the rear bumper. Again, this could help with aerodynamics and downforce. Previous modifications, such as the wide grille opening, carbon-ceramic brakes, rear spoiler, and wider fender wings, remain unchanged.

There’s a good chance Tesla already, unofficially, bested Porsche’s 7:42 time around the track. Last month we reported that Tesla could be beating Porsche’s time by a full 20 seconds. However, if Tesla were to beat Porsche’s record, the German automaker may be able to set an ever faster lap time. When Porsche lapped the Nurburgring with the Taycan and set a new record, it did so with the Taycan Turbo, not the slightly more powerful – thanks to Overboost and Launch Control – Taycan Turbo S. Both produce the same 616 bhp; however, the Turbo S can produce up to 751 bhp in a pinch.

For Tesla to officially beat Porsche, it will have to offer whatever modifications it made to the cars to the car-buying public, which is something Tesla CEO Elon Musk said would happen with the Plaid package. There’s a good chance Tesla will set a new lap record at the track. How long it will stand is the key question.