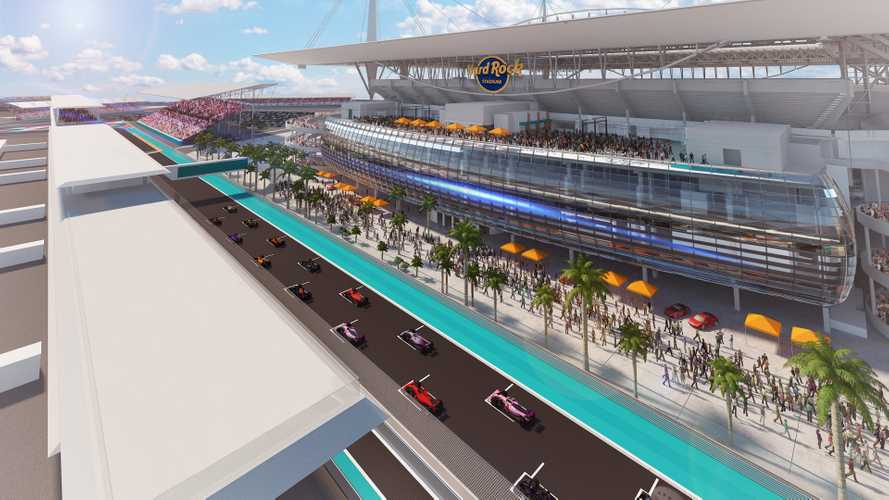 Plans to run the Miami Grand Prix around the city's Hard Rock Cafe stadium have taken a step close to fruition with the confirmation of an agreement in principle between Formula 1 and the local promoter.

Having abandoned the initial attempts to run the race in the harbourside area – due to local opposition and the complications of securing permits from the several authorities with jurisdiction – the focus instead to the area around the stadium, which is also owned by promoter Stephen Ross's RSE Ventures organisation.

A track layout which uses mostly car parks and land owned by the stadium, best known as the home of the Miami Dolphins, has been designed.

However, it also includes around half a mile of public roads along Northwest 199th Street, to the south of the stadium.

It read: "We are thrilled to announce that Formula 1 and Hard Rock stadium have reached an agreement in principle to host the first ever Formula 1 Miami Grand Prix at Hard Rock Stadium.

"With an estimated annual impact of more than $400 million and 35,000 room nights, the Formula 1 Miami Grand Prix will be an economic juggernaut for South Florida each and every year.

"We are deeply grateful to our fans, elected officials and the local tourism industry for their patience and support throughout this process. We look forward to bringing the greatest racing spectacle on the planet for the first time to one of the world's most iconic and glamorous regions."

On his Twitter feed, Garfinkel indicated that the race would be held in May – a month that is currently busy with European events, including of course Monaco.

"The world's greatest racing F1 has never been to S.Florida," he wrote. "Imagine people coming to this region from around the world in May. Multiple passing zones and world-class clubs and amenities. Barcelona, Monaco… Miami… make it happen."

Although the Hard Rock venue will require the support of fewer authorities that the original downtown course – where the Bayfront Park authority proved particular difficult – it will still need the backing of the Miami-Dade County Commission.

A meeting of local residents last month saw many expressing their concerns about the race, and county commissioner Barbara Jordan, who hosted the gathering, said she opposed the event.

"It solidified my position as a no," she noted. "In terms of something this community does not want."