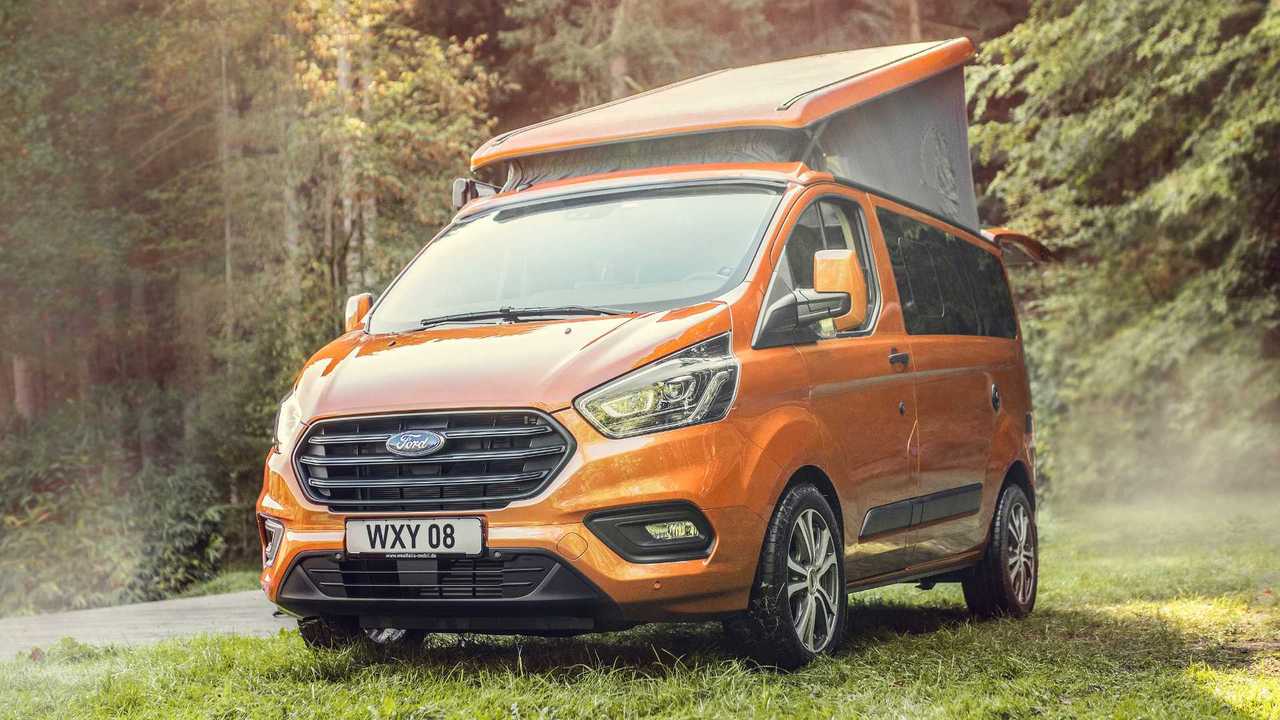 The £56k van sleeps up to four people.

Ford’s Transit Custom Nugget campervan has gone on sale in the UK with prices starting at a little over £56,000.

Based on the popular Transit Custom van, the camper comes with a three-room layout and can sleep as many as four people, while providing a wi-fi hotspot for up to 10 devices. Created in partnership with renowned conversion firm Westfalia, the Nugget is well established in Germany, but it’s only now becoming available for customers on UK shores.

Prospective UK customers are already getting their first glimpse of the vehicle at the Caravan and Motorhome Show, which is currently underway at the NEC in Birmingham. There, members of the public can get hands-on with the vehicle, exploring its living space and two double beds.

The first of those beds is found in the roof, below the pop-up tent, while the second is found in the living area. The Nugget also gets an L-shaped kitchenette, complete with a double-burner gas cooker and a 40-litre fridge, and when the lower bed is not in use, there’s a dining area for five. That seating is provided by the three places on the forward-facing bench, plus the two front seats, which swivel to face the cabin.

But as well as space for living, the Nugget is also a touring vehicle, and it comes with all the mod-cons of the Transit Custom van. There are driver assistance systems, such as adaptive cruise control that maintains a safe distance to the vehicle in front and the Blind Spot Information System that tells the driver when a vehicle is in his or her blind spot. There’s Ford’s latest Sync 3 infotainment system, too, which provides satellite navigation and connectivity for smartphones.

Under the bonnet, the Nugget is powered by a 2-litre diesel engine, although customers get a choice of two power outputs. In exchange for the £56,273 starting price, you’ll get a 128 bhp version, but there is an opportunity to upgrade to the 182 bhp variant. The former comes with a six-speed manual gearbox, while the latter is offered with a choice of manual and automatic transmissions.

“More and more customers are recognising the freedom and fun that camper vans can offer, and we’re excited to be able to offer a greater number of adventure-seekers our Transit Custom Nugget, which is already much-loved in Germany,” said Hans Schep, general manager of commercial vehicles at Ford of Europe. “Transit Custom’s comfortable cabin, advanced driver assistance technologies like Sync 3, and fuel-efficient 2‑litre EcoBlue engine make it the perfect platform for the Nugget camper.”