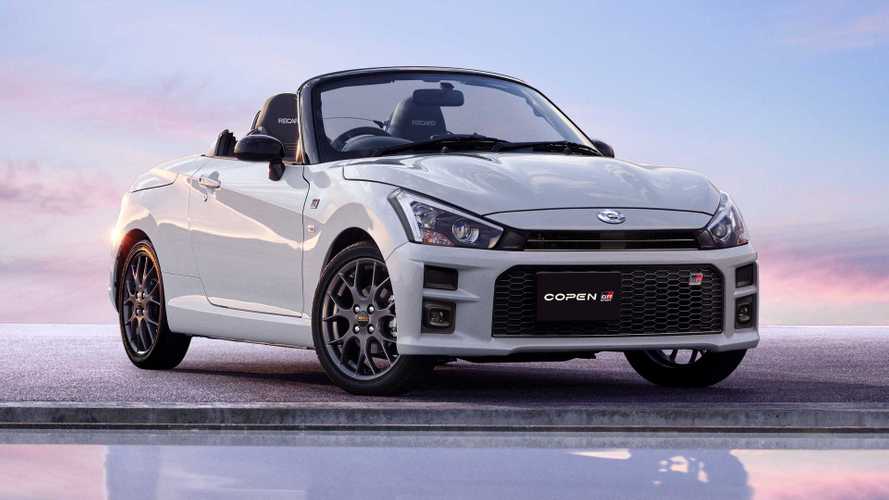 The tiny convertible gains both mechanical and cosmetic upgrades.

Toyota introduced a sports car series in Japan back in 2017 with an assortment of models covering everything from the tiny Vitz / Yaris to the Harrier SUV. Tweaked by Gazoo Racing, the models form a three-tier system based on the amount of upgrades implemented, with the base ones carrying the “GR Sport” moniker. These are followed by the midlevel “GR” (like the GR Supra) and the flagship “GRMN” (like the Yaris GRMN). On top of all these models there will be Super Sport hypercar with roughly 1,000 bhp.

Interestingly, Gazoo Racing is now turning its attention to a car produced by Toyota’s wholly owned subsidiary Daihatsu. The pint-sized Copen will be offered in Japan in a warm GR Sport trim with an assortment of mechanical and visual upgrades. Taking into account the tiny two-seater convertible falls into the kei car category, it means the engine’s displacement remains at 660cc and power at 63 bhp. The three-cylinder unit can be hooked up to either a five-speed manual or a CVT equipped with a seven-speed paddle shifter.

Gazoo Racing’s focus was on sharpening up handling by tuning the suspension and enhancing the body rigidity through a series of upgrades. For example, there’s now a front brace and a reshaped centre brace, along with a new shock absorber and revised suspension spring rate to make the ride experience a bit smoother. The Copen GR Sport convertible also benefits from an updated electric power steering to provide a “sense of unity between steering and vehicle movements.”

Then there are the cosmetic modifications, including redesigned bumpers and an updated front grille. The car sits on model-exclusive BBS wheels and features a black tint for both the LED headlights and taillights, while the fog lights and their bezels are also different than what you’ll find on a regular Copen. Inside, Recaro seats contribute to a sportier atmosphere further, as does the Momo steering wheel complemented by a revised instrument cluster with red accents.

The tiny forbidden fruit from Japan:

2019 Daihatsu Copen Coupe looks as cute as a button

A new feel lightweight sports car combining the joy of the open air with the TOYOTA GAZOO Racing delight of handling at will.

The new Copen GR SPORT is a two-seater convertible sports car according to the minivehicle standards and the first sports car in the series "GR" developed by TOYOTA GAZOO Racing. This is an OEM car manufactured by Daihatsu Motor Co., Ltd. for development, utilizing the knowledge gained through TOYOTA GAZOO Racing's motor sports activities.

Aiming to create ever-better cars by removing the barriers of the manufacturers, it combines the ideal driving experience of the GR with the Copen, a minivehicle, neither of which are in Toyota's product lineup. Born as an entry model of the GR that can feel the road surface and the behavior of the car body directly, and expand the possibilities of the Copen, you can enjoy a hard-ride like sports car, and easily enjoy sports driving.

Specifically, development has focused on body rigidity and suspension tuning. Optimal body rigidity balance is achieved by adding the front brace and changing the shape of the center brace. The suspension spring rate was optimized for the body rigidity, requiring time and effort, and in combination with a dedicated shock absorber, a smooth ride with supple movement, and the feeling of the tires gripping the ground was pursued.

In addition, the electric power steering tuned exclusively for this time contributes to a sense of unity between the steering and vehicle movements. We offer the pleasure of being able to use the engine power to the max because it is a minivehicle, and the superior comfort of controlling the vehicle at will, which is like a lightweight sports car in everyday life.

The interior features special RECARO seats and dedicated self-lighting triple meter display to create a sense of anticipation of the ride, and a special piano black-toned decorative center cluster creates a sophisticated atmosphere. There are eight body colors in all. The interior color is black.

In addition, the electrified open/close roof Active Top is standard equipment, so you can easily enjoy the exhilaration of the open air.

TOYOTA GAZOO Racing will continue to make efforts to create attractive cars for car fans through dialogues with customers, utilizing the voices of many car enthusiasts to "create ever-better cars".

*Includes consumption tax; does not include recycling fees. Different pricing applies for Hokkaido and Okinawa.

Additionally, the customized parts, GR Parts that amplify the pleasure of a sporty styling and open air was also set in the Copen GR SPORT and was launched. The front spoiler, side skirt, and rear side spoiler that produce wide and low styling in addition to aerodynamic performance are available. In addition, front corner spoilers and rear trunk spoilers that contribute to a comfortable driving by arranging the airflow are available.