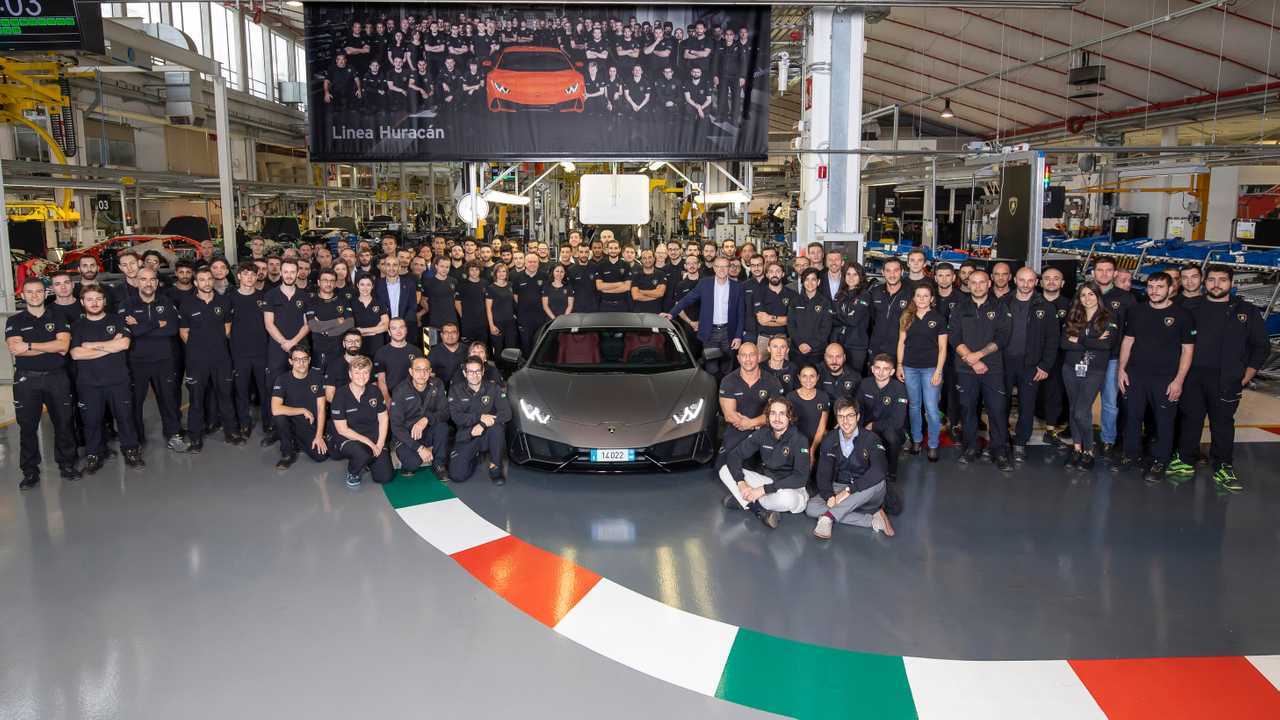 The Urus “Super SUV” is without a shadow of a doubt Lamborghini’s obese cash cow at the moment, helping the Italian brand nearly double its sales in the first half of 2019. The baby Lambo has also turned out to be an immense commercial success as the Sant’Agata Bolognese marque has managed to assemble 14,022 Huracans in just five short years. Why is that number important? Because that’s how many Gallardos were built over the model’s entire life cycle of 10 years, from 2003 to 2013.

In other words, the Huracan only needed half the time to match the total production run of its predecessor, with the chassis number 14,022 recently rolling off the assembly line in a lovely Evo coupe guise finished in Grigio Titans as ordered by a customer from South Korea. Unveiled at the beginning of the year, Evo represents the latest and greatest variant of the Huracan, and it has already spawned a Spyder version for those with an appetite for droptop thrills.

Lambo's idea of an Evo:

Lamborghini isn’t quite done with the Huracan’s development as recent spy images of a camouflaged prototype indicate the V10 supercar could spawn yet another version. The jury is still out as to what that might be, but some are indicating it’ll be a rear-wheel-drive Evo model to please the purists, while others suggest it’s an Evo Performante. Whatever the case may be, it appears the Huracan family will be expanded furthermore sooner or later.

If you’re wondering how sales have been in the first half of the year, Lamborghini managed to move 1,211 units of the Huracan, 649 Aventadors, and a whopping 2,693 Urus SUVs for a grand total of 4,553 units or 96% more than in January – June 2018. With Lambo doing better than ever, it’s no wonder the Volkswagen Group recently refuted those wild rumours about selling off the brand or setting up an initial public offering (IPO).

Sant’Agata Bolognese, October 14, 2019 – In just five years of production Lamborghini Huracán number 14,022 rolls off the assembly line, marking a production milestone for the V10 model of Lamborghini: the Gallardo, the previous Lamborghini V10 model, was produced in a total of 14,022 units over a production cycle of ten years (from 2003 to 2013).
The V10 Huracán family, successor to the iconic Gallardo, made its world debut in 2014 with the coupé version, followed by the Spyder and the rear-wheel-drive versions: the Performante in 2017 and the Performante Spyder in 2018 proved their performance capabilities, holding several lap records. In 2019 the new Huracán EVO (coupe and Spyder) was introduced, featuring a next generation V10 engine and incorporating next-generation vehicle dynamic control and aerodynamics.
The commemorative model with chassis number 14,022, a Huracán EVO coupé in Grigio Titans (grey), is destined for the Korean market.
In the first six months of 2019 (from 1 January to 30 June) Automobili Lamborghini has delivered a total of 4.553 cars to clients: an increase of 96% compared to the same period last year.
The Huracán accounted for 1,211 units, including deliveries during the Huracán Performante’s phase-out period and introduction of the new Huracán EVO, of which first customer deliveries started in June 2019. The Aventador, the V12 brand icon headed by the SVJ model, maintained its high levels, with 649 units delivered to customers.