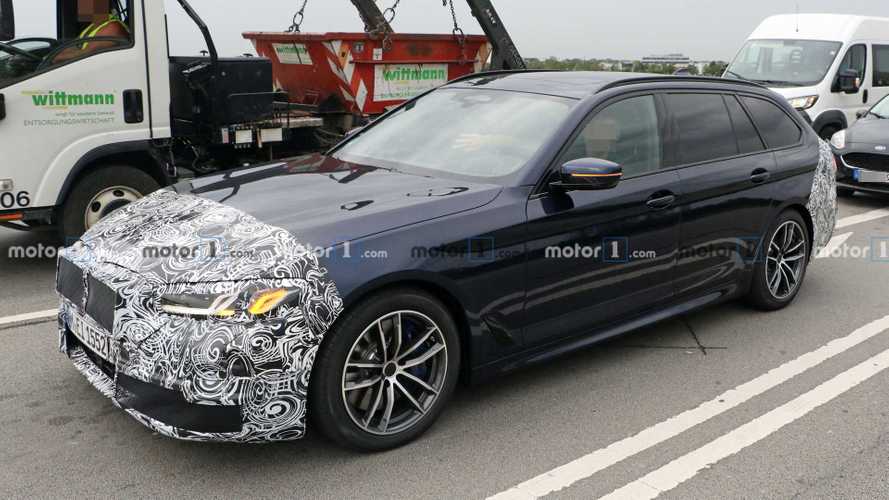 Is this a game of Spot the Differences?

Spy photos of partially camouflaged BMW 5 Series saloons and estates keep coming. The latest batch of photos provides another peek at the estate and, for the first time, a look inside, too. However, this is a refresh, which means much of the car will remain unchanged.

Inside, that means customers should expect an interior with no significant changes. The photos do show the infotainment screen has grown in size, which is expected given the trend of larger screens in modern cars. New software should accompany the new screen. It’s nothing significant; however, a refresh is not a complete redesign.

The same restrained effort inside also translate outside. Much of the BMW 5 Series Touring in the spy photos wears just enough camouflage to hide the impending visual upgrades. Like other model refreshes, the BMW 5 Series will receive updated headlight and taillight designs. These will pair with a new front fascia, including a larger grille, and a slightly redesigned rear bumper.

Powertrains will depend on the market with BMW selling the current 5 Series with a range of petrol, diesel, and hybrid powertrains, which should carry over to the updated model. Sizes range from the base 2.0-litre to the range-topping twin-turbocharged V8 in the M5. However, the 5 Series will also receive a plug-in hybrid option. This will borrow the electrified powertrain from the larger, and already refreshed, 7 Series.

In the 7 Series, BMW pairs a turbocharged inline-six engine with an electric motor to produce 389 bhp. It will be detuned slightly for the 5 Series, producing about 375 bhp in the updated model.

The next BMW 5 Series won’t change much when it debuts mid-to-late next year before going on sale as what’s expected to be a 2021 model. One of the bigger mysteries about the model is the grille, which has grown quite large on other recent BMW models. It doesn’t appear the 5 Series’ grille will suffer the same fate.