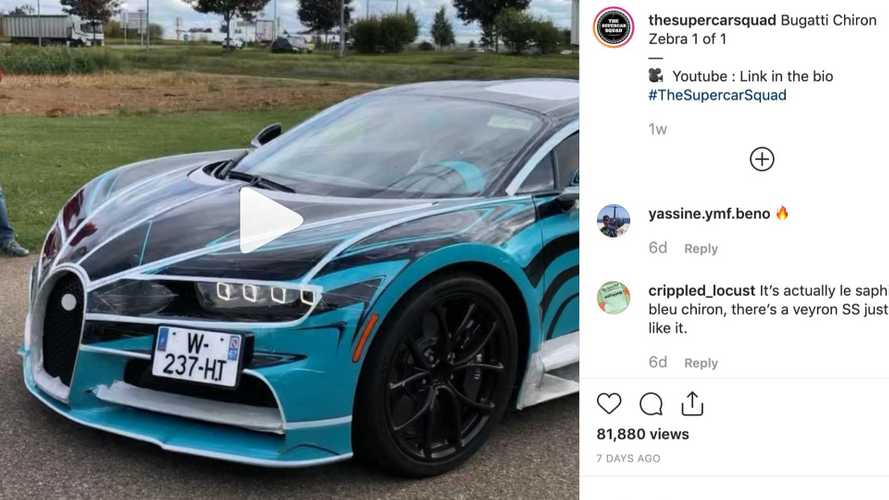 As if driving a Bugatti Chiron wasn't eye-catching enough. There's no missing this one.

If you're looking for a Bugatti Chiron with a zebra-style paint scheme, then the supercar maker has the perfect vehicle for you. A brief video catches a glimpse of it on the move.

This vibrant Chiron still wears protection on the front end, badge, and sides, which suggests that Bugatti is preparing to deliver it to the owner. The body is mostly dark blue at the front, and the paint scheme gives way to a shade of teal. The stylists then create stripes of these two hues, particularly along the flanks and rear deck.

What's next from Bugatti?

Don't expect Bugatti to call this special Chiron anything as vulgar as the Zebra Edition or something like that. Judging by the paint scheme, this model is possibly a successor to the elegantly named Veyron Le Saphir Bleu because they share a very similar, stripey aesthetic (see video below).

Bugatti doesn't have many Chirons left to sell. Out of the 500-unit production run, there are fewer than 100 left as of April 2019. Any remaining customers need to be patient, too, because these final examples don't enter production until 2022. According to the company, most buyers are opting for the Chiron Sport, rather than the standard model.

The company is also planning on a 30-unit production run of the Chiron Super Sport 300+ starting in 2021. Despite being theoretically capable of going in excess of 300 mph, this version has an electronically limited top speed of 273.4 miles per hour. Each one costs 3.5 million euros (£3.17 million at current exchange rates).