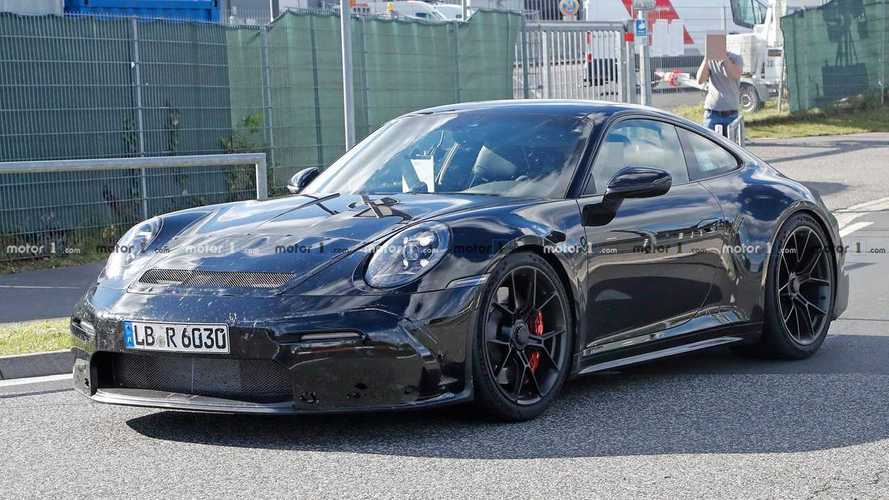 Porsche keeps the camouflage fairly light but still conceals the major differences from the standard GT3.

New spy shots provide a fresh glimpse at the Porsche 911 GT3 Touring's development. When it arrives, the model would occupy a spot in the lineup as a GT3 with a focus on providing driving excitement, rather than providing record lap times around a track.

The Touring appears to wear the same front end as the standard 992-generation GT3, which is also under development. This gives the model large inlets in the lower fascia and a vent at the tip of the bonnet.

The Touring is significantly different at the back in comparison to the standard GT3. Instead of a massive, fixed wing, this variant has the smooth tail from the basic Carrera. It incorporates an active spoiler that can tilt upward. A pair of exhausts emerge from the bumper, and there's a diffuser below them.

The 992-generation family of GT3 models reportedly use an updated version of the existing 4.0-litre naturally aspirated flat-six engine. Expect the output to be around 550 bhp, which is a decent upgrade over the current 494 bhp.

While the current GT3 Touring gets a six-speed manual, it's not clear whether the three-pedal setup would apply to the new model, too. Videos of the model's development let us hear these pre-production models going through the gears, and the shifts sound quick enough to be a dual-clutch gearbox.

The debut date for the GT3 is a mystery, and it's not clear whether the Touring version would premiere at the same time. Porsche has lots of 911 variants to unveil, though. Spy shots show that the Carrera GTS and Turbo models are also on the way.