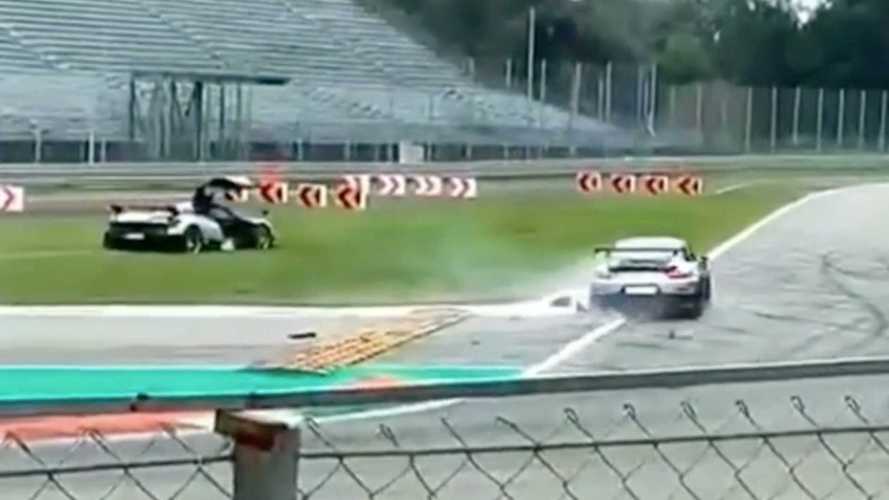 During a recent track day at Monza, a Pagani Huayra BC was struck from behind by a Porsche 911 GT2 RS. Based on the short Instagram clip both cars suffered serious damage.

The crash appears to have taken place at the legendary turn 1 chicane on Monza’s hallowed Grand Prix circuit. This difficult turn requires a strong command of your car’s braking power and the ability to slow down after a long straightaway. At the 2019 Italian Grand Prix, this tricky corner caused the likes of Lewis Hamilton to lock up and cede his second-place position.

Unfortunately, the driver of the 700 horsepower track-focused Porsche 911 GT2 RS entered the tight corner with far too much speed causing him to slam into the side of a Pagani Huayra BC coupe. The Porsche 911 GT2 RS is an incredibly capable track weapon that requires a skilled driver to manage its mind-bending performance. Even with a Nurburgring lap record driver skill outweighs a car’s ability.

Based on the brief footage the driver of the Porsche 911 was unharmed opening his door before the car came to a complete stop. This very dangerous move highlights the need for proper track instruction that keeps you safe even after a traumatic crash.

Pagani to use updated AMG twin-turbo V12 engine until 2026
⠀

We currently have no information about the driver of the Pagani Huayra BC that was struck in the video. After the impact with the 911, the Huyra’s door was forced open which shows the immense forces at play during the crash.

Although we are sad to see two incredible machines destroyed, we hope that both drivers are ok and their safety equipment protected them during the crash. A moment like this shows just how important proper track instruction is when pushing any car to its limits.